A Man and His/Her Makeup! 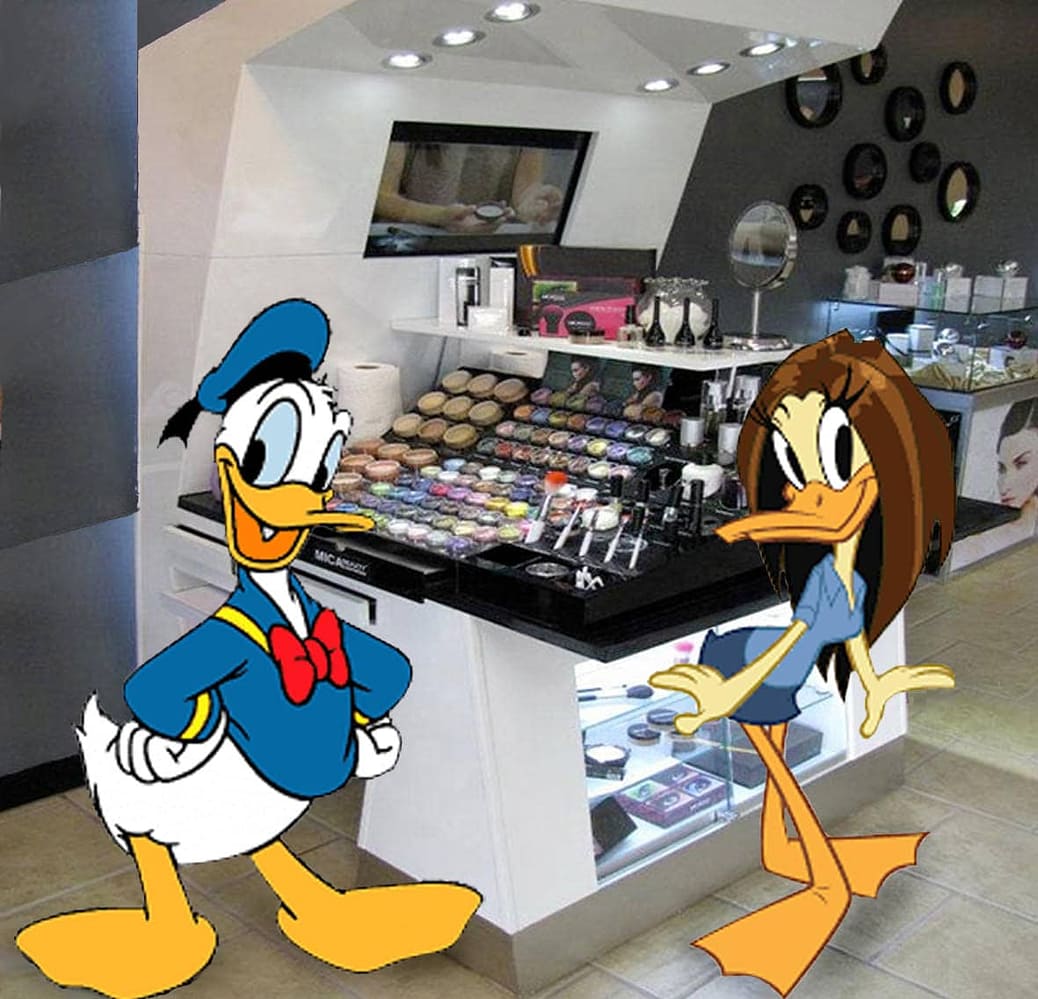 Preface:  This happened about 10-12 years ago so the conversation is just from memory but as actual as I can remember.

One evening I went out as Mary to do some shopping at a Fred Meyer store.  I went there because it is close and had reasonable prices for cosmetics, not because of makeup I was particularly interested in. As I was approaching the cosmetics department I noticed a man, obviously by himself, shopping in the same aisle.  Since it seemed unusual to see a man there alone, I was curious and I kept peeking to see if he was shopping for something specific and he did seem a bit confused. I nonchalantly walked over and, not wanting to scare him away, and asked him if I could be of any help.  I knew the feeling since I had gone through the same feeling when I wanted to buy some cosmetics when I was learning how to become a girl.

He seemed a bit startled and maybe a little embarrassed but said “Uh, okay, thanks.” I asked if he was looking for anything in particular and he said “Some kind of lipstick, I guess'”.  I didn’t want to get nosey and ask if it was for him or a friend so I just said it kind of depends on skin tone and color preference.  He commented that he didn’t know there were so many colors and hues.  I answered that it can be confusing, for sure.  He asked what color I was wearing and I said it was close to the color Night Blush although I don’t really remember now.

I have no idea if he “read” me but he seemed to relax a bit and asked about mascaras, liners, foundations and such so I showed him what kinds I used.  I explained that “Since I am Asian, my skin tone is very different then say yours.” He answered that it made sense.  I then showed him how he could see the differences if there were any samplers available. This happened way before the pandemic so samplers were often available at most stores like FM. “Now watch.” I said as I put a few different tones of blush on the back of my hand.  “See the differences?  This sample is what I would use.” pointing to one closest to my skin tone.  He said, “Oh, I think I sort of understand now. Thank you for your help, I was getting very confused here.”  “No problem.  Are there any other questions you have?” I asked.  “Uh, no, you helped me a lot.”  I smiled and left it at that and went on my way.

A few minutes later I was at the checkout counter and the same man was ahead of me.  “Hi again.” I said. He acted a bit embarrassed in front of the checker so I said “Oh it looks like you found some nice things for her.” as I saw the assortment of cosmetics he was buying.  He said “Um, yeah, I hope she’ll like what I got her, thanks to you.”  I smiled and he smiled back with a wink.  We both left as satisfied customers.

Thanks girls for taking the time to read my article and you may offer up any comments regarding my article and/or choose to answer one or more of the questions I’ve posed to you below:

Thank you girls and with much love, Mary

View all articles by Mary Contrary
The following two tabs change content below.

Life-long but not full-time transgender female looking to meet new friends. It's more than just dressing up for me, being Mary makes me feel complete. Had I had the finances and personal freedom I would have transitioned to full-time many years ago. As it is I now have to be satisfied with picture sharing and making new friends.

The first time I was in the make up aisle I was totally lost, confused and nervous. I was only looking for nail polish but so many choices. When I decided to tell my wife about my wanting to dress, she handled all of the make up selection for me. What a relief!

Hi Karla, aren’t you the lucky one! I wished my wife would help me with makeup but she was totally against it. So I too was a lost, confused and nervous soul. Actually I still wonder what a lot of these potions are for.

I was fairly comfortable, I had shopped with GG friends so I knew my way around but I had NO IDEA what shades etc would look good on me. I had an employee who also was a AVON lady and had a pretty good business selling Avon. She easily made as much as I wa spaying her in her “regular” job. I once asked her “If I was a woman, what colors in make would you think would look good on me?” She said, “I know you wear panties as you have vpl’s, so I’ll be glad to give you… Read more »

Hi Kristen, having an Avon Lady as an employee must have been quite handy!

It’s been so long ago that I first bought cosmetics that I’m sure my memory is more than hazy. I kind of developed a thick skin about shopping for such things, being the only male in my household (Wife and two daughters). Buy tampons or picking up a pack of panties for one of them was a regular occurrence. Mind you that I’d been cross-dressing for a couple of decades before I met my wife. I don’t remember buying anything prior to getting married. What intrigued me about your story was that you went to Fred Meyers for your shopping.… Read more »

Hi Patricia, yes, I live in Seattle. I didn’t know Fred’s was only in WA and OR. Learn something every day, right? I don’t shop only at Fred’s. I tend to go to a mall or other stores like Target. I’m not real picky about labels and such.

I rarely buy from Fred’s, but I do get gas from them. I can count on them being in the lower 5% price wise. For clothes I buy what looks good on me and is reasonably price. I’m on a fixed income so I do need to watch the budget. I’ve gotten a few things from Targèt. I haven’t been out shopping for a while but used to frequent J C Penney’s and Sears mostly. I’ve gotten great service in both places. I was even in Sears in drab one day and noticed a dress that called out to me.… Read more »

I usually shop at resale shops for clothes. I don’t always find something but I did find quite a few that I probably wouldn’t have found anywhere else, especially at bargain prices. The only place I shop for new is for undergarments and hose.

Resale shops are great. I’ve found that the more upscale of them are really willing to help. I was in one after work one day. I hadn’t intended on buying anything. I just had some time to kill and wanted to see what they had, since I hadn’t been in that one before. I had recently decided that if I couldn’t try on, I wouldn’t buy. Since I was in drab, I wasn’t going to ask to try on. Anyway, as I was going through the rack, I’d take out something that I thought was nice, turn the hanger to… Read more »

They really are! If I buy from a resale shop I’ll be pretty sure no other girl will show up in the same thing!