This week I am truly honored to hear from Amy. This is the first time that a genetically born woman has shared her crossdressing success story on Crossdresser Heaven. Amy’s story is a blessing to all of us, and shows us that love’s embrace can strengthen even with – and sometimes because of –  crossdressing.

If you’d like to share you crossdressing success story, please take a moment to submit your story. I’d especially like to encourage wives and girlfriends of crossdressers to share their successes. Even if you’re still struggling with your loved one’s crossdressing your small successes will bring encouragement to many others who are walking the same journey.

Hello, I’m Amy; I’m a 36-year old female who lives in a small town in Georgia.

I don’t know if I can publish a story being a female, but I am so inspired by all of your stories that I had to tell mine. I met my husband about 5 years ago at a pizza restaurant where we both worked at the time. I had identified myself as a lesbian for 10 years, but hadn’t found the right woman. I had had two boyfriends, both of whom validated my reasons for choosing the lesbian lifestyle, even bearing a child from one of them.

But this one, 9 years younger than me, there was just something about him I couldn’t put my finger on, but I knew I had to have him. I heard was a preacher’s son and had a good reputation, unlike the last one who’d left me and my son 5 years earlier. Anyway, we hit it off and dated for 4 years before getting married. I always felt like he was more of a woman in bed, which naturally I liked, having been a lesbian before.

Now I had a kid, plus living in the Bible belt is not easy when you’re not living the “straight” and narrow, so I no longer had the desire to seek out a woman. So he was perfect, the best of both worlds. Little did I know just how perfect.

I knew he liked wearing my tank top I once put on him, but I thought it was no big deal since it never came up again. Later I found out that he was attracted to me from day one, having listened to my lesbian escapades. It seemed a part of him identified with/wanted to be one of those women. This might sound strange, but one night 3 years into our relationship, I heard in a dream or vision from a beautiful goddess (crazy, I know) telling me that I needed to tell him that it was ok to wear women’s clothes; that it was an ancient part of him that would be very healing if he would just allow it to happen.

I told him this, but he said nothing and I forgot about it. It wasn’t until our wedding night that I experienced the full extent of my husband’s desire to cross dress. We went and bought lingerie that I was hoping he would especially love on me. It seemed he cared more about himself wearing the clothes than me. I was actually jealous of a robe!

This was such a downer for me on our honeymoon. But how could I have known? We hadn’t been able to live together during our engagement, between his conservative background, and my not wanting to shack up only to be abandoned again. And he’s quite shy about such things.

Well, I am happy to say after nearly 2 years we have adjusted and grown together, and through a lot of communication and encouragement have created a beautiful relationship that is like no other. Thanks to Vanessa’s website, Vicki’s wise words for Christian Cross Dressers, and all the CD stories, I have come to understand why my husband feels the way he does; it even endears me to him more.

The stories have made me cry at times. One day I saw on Oprah a transgendered man (woman now) and her wife who would shop for jewelry together, and something about their story, their kinship made me cry as well. It wasn’t tears of sadness, but more of a cleansing and a relieving. It felt like, “Yes, that is it”, like a resounding truth.

Now I dress him up all the time. Occasionally he will put something on, but he is more passive and the thrill for him is someone else doing it to him. I no longer see his desire to wear women’s clothes as taking away from me. In fact, I think this has strengthened me to be more, to explore my masculine side, my dominating side (grin), and now I play video games with him and fix things around the house.

I’ve even explained to my 11 year old son that his step dad feels good in women’s clothes, and he was ok with that. He actually said it explained a lot and seemed relieved to now know the truth. (I’m sure he’s noticed him wearing my jeans and pj’s from time to time.)

My dream is for us to move to a place where he could be comfortable to be himself, be it in women’s clothes or makeup or even transitioning to transgendered. This whole experience has taught me that gender is a very complex thing and that we all have a varying degrees of masculinity and femininity in us.

It has taught me to question, what makes us a man or a woman? Doesn’t our Creator create us to express ourselves the way we want? Isn’t there a feminine aspect to our Creator that he/she wants to shine through us? What would the world be like if we were more free to express both male and female sides of us, or just one if that’s what gives us joy? I think it would be an infinitely better world.

OMG I love this story! Thank you for sharing! This is how I feel, like a lesbian. I kiss and touch like a woman. I hope to find a relationship like this when I’m ready. ❤️

So good to hear these stories….. Often seeing that bits and pieces of “my story” are present here….. Makes me feel so much more comfortable in my day to day struggles as “Jamie”…..

Beautiful post Amy, and really nice to hear from a supportive wife’s side. It sounds like taking a relationship to a level of trust, love, and support that many relationships never reach. Ironically, this week is Valentine’s Day. It’s interesting and super cool how you have found a way to keep your religious beliefs a part of your life in a world where too many try to tell us what to believe and what is “right”. There are so many deep conversations waiting to be had, I’ve always been fascinated by different religions. I do like your rhetorical questions at… Read more »

What a great story. I wish more of us girls could be so lucky to find someone like you. Good luck on the rest of your life together.

Wow what a great story. Congratulations to you both. Such an understanding supportive family n wife. Thank you so much for sharing 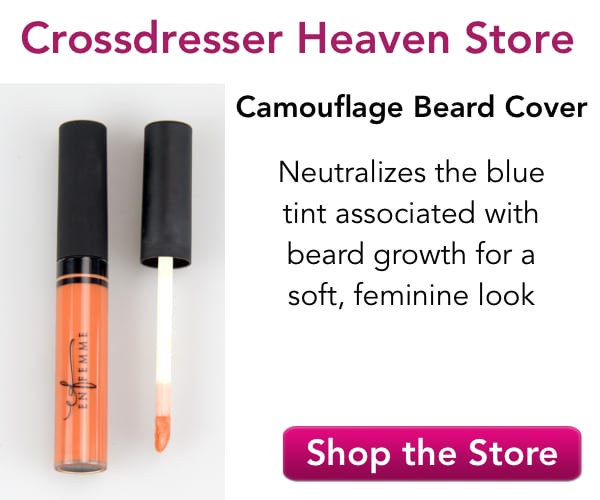 How does dressing affect your health compared to drab