Betty Goodall and the Crossdressers 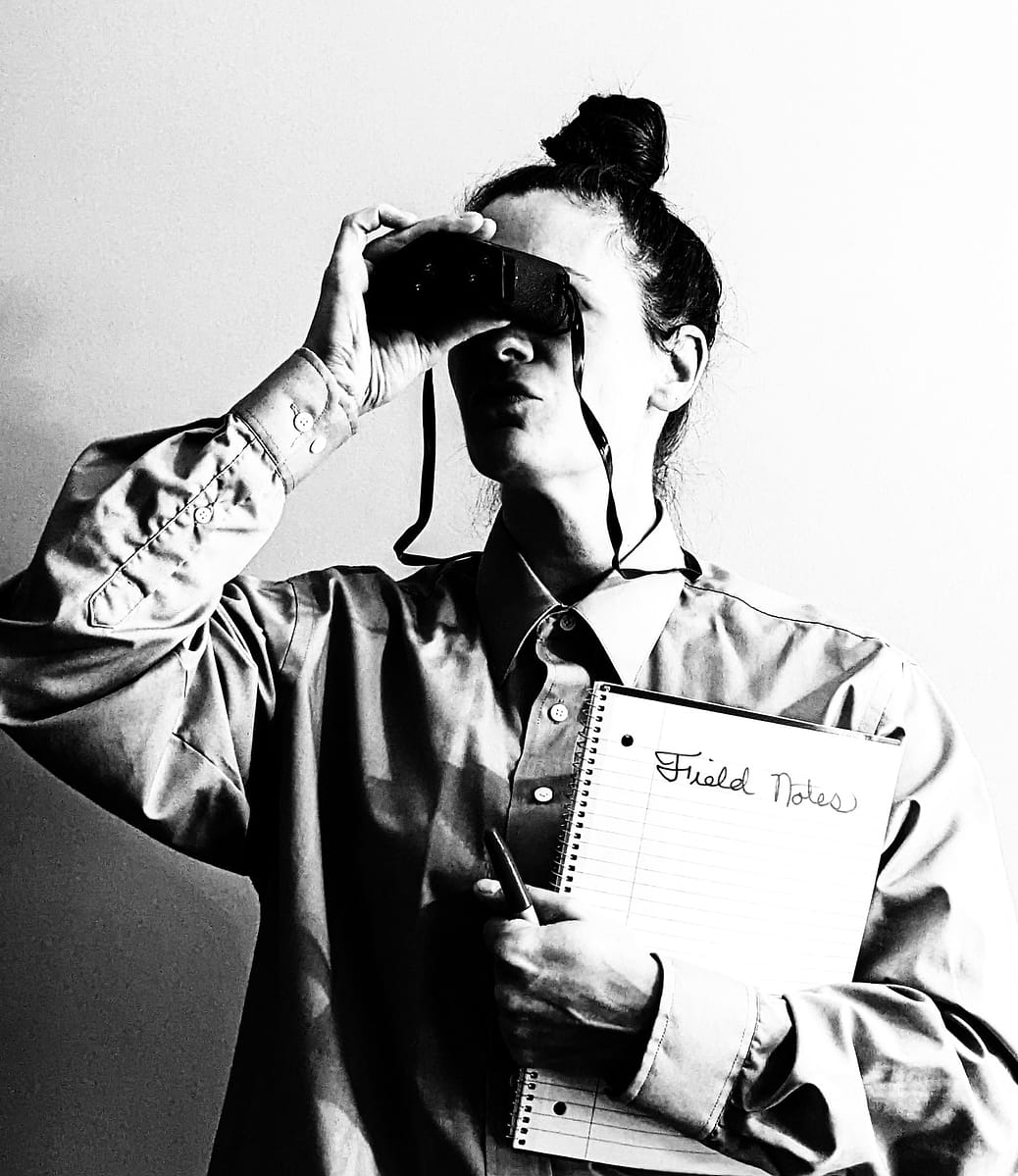 My name is Betty Goodall and I specialize in the ethical study of crossdressers in social and family life. They selected me to study these creatures to better understand their behavior and traits by the World Future Council. My research directive is to assist crossdressers in gaining acceptance in their own nests and eventually to their surrounding natural habitat. Once acceptance is achieved, we predict that these lovely creatures will flourish and become the free-range creatures they were intended to be. The following is a summary of my findings.

To best study the crossdressers, one must live amongst them and infiltrate their social network or “pack.” My infiltration was no simple task. I attempted to make contact only to be watched by them, but largely ignored and rejected as an outsider. The crossdressers are a cautious breed, and for good reason, as there are many threats to their way of life.

After a few failed attempts to be accepted into their group, I hatched a creative plan, letting them know I was one of them and posed them no threat. A negative vocalization seemed to be associated with my uniform, and I was quick to recognize it. I learned that “drab” is not a look that is appealing to the crossdressers. I changed from my council-issued khaki button-up shirt, cargo pants, and safari hat, cloaking myself in what I felt would be more similar to their own attire.

I tried gaining access the next day by donning a dress, flats, and red lipstick. Progress was made, a few crept close to me and sniffed about before wrinkling their noses and retreating to the safety of their group. My next attempt proved to be successful after I donned the dress and lipstick and then added fishnet stockings and six-inch stilettos. I soon could walk amongst them, even if I served as the lowest ranking member of their pack. Notable acknowledgments of acceptance are vocalized as “yass girl, love those heels,” and “mmm, girl, please!”

Amongst each other, the behavior of the crossdressers is that of a close-knit pack with great care exercised in supporting one another. There are occasional bouts of armed conflict that include slapping and hair pulling. Often these bouts of conflict are exaggerated by vocalized feminine insults. The conflicts seem to always resolve and can even blossom into lovely friendships.

I was able to get close to the pack and see some of their transformations for the very first time. I was careful to document the rituals so as they may be recorded for use in future studies. From what I can discern, the ritual is unilateral, as it seems to only be deliberate and careful in the first half. The “becoming” part of the transformation is very much enjoyed and the transformation back into their male likeness presents as a somber undertaking.

The transformations always appear to begin with a shower in which all manly scents are diligently scrubbed away. After the scent scrubbing, great care is taken to remove any visible facial and body hair. There are different means of hair removal amongst the pack. Some use a single method, while others are creative enough to use a variety to achieve a smooth and slippery body. Methods include shaving, plucking, waxing, and, in some cases, complete obliteration with the use of a powerful and expensive laser. I haven’t determined the purpose of the hair removal, but I feel confident it has to do with either wind velocity or aerodynamics.

The next step in their transformation is the use of lotions, potions, and scents. After removing all body hair, the crossdresser takes care to cover themselves in copious amounts of lotion. You know they have applied enough lotion when they begin to coo “oh my legs are so smooth” as they caress their calves. They use different potions to conceal the shadow of a beard and prep their face for makeup, which comes later on. The crossdresser takes great care in selecting their scent, which is typically a scent most associated with that of a floral aroma.

Underdressing is the next step in the ritual, and it seems to be a very exciting and valuable part of the transformation. Much care and thought are put into selecting the undergarments. I observed that most of the crossdressers had far more bras and panties than any cis female since the invention of underpants in the 13th century. The process of underdressing begins with the application of a medieval contraption that flattens and constricts the genitalia into an entirely different shape. Then the panties are donned, followed by the bra, which is filled out with what appear to be chicken breast cutlets in a set of two that are placed laterally upon the chest. I should note that during the selection ritual, care is taken to have each piece of underdressing match perfectly with one another. Also, after each item is added, the crossdresser pauses to check their progress in a full-length mirror. I was able to decipher giggles and an “oh my!” vocalization as being positive, with grunts, snorts, and cursing being indications of displeasure in the reflected appearance. Popular selections for bras and panties were those with the most lace, ruffles, or flavored ones (that is my theory) that are snarffled up by hungry buttocks. The panty selection process led to the occasional erection, which I ignored in order to maintain a high level of professionalism.

Next, the crossdresser adds either a pair of pantyhose or a garter belt with stockings to their underdressing. I observed some being confused as to which was intended to go on first when it came to panties and pantihose, but in the end, they always found a suitable way in which to wear their selected items. The garter belt with stocking also proved challenging for the crossdressers as they often struggled to connect the pieces into a cohesive look. The clips and hooks were fiddled with at great length. I noted that the most popular (whether pantihose or stocking) was a fishnet style or ones that had a glossy shine so strong I required eye protection.

Crossdressers take great pride in the collecting of shoes. Many have enormous collections that were the envy of others. I suspect the shoes are a sign of wealth amongst them, but I cannot be certain just yet. Many of the shoes have extraordinarily high heels that have the capacity to be fatal should they fall and break their neck while attempting to walk in them.

Makeup was an aggressive part of the transformation process that resulted in grunts, curses, and flared nostrils. Most seemed to be challenged by this part of the process and needed help from others that were more proficient at this art form. Some hung sparkly and metallic ornaments on their bodies to finish their looks. After makeup is finished, dresses and wigs go on and the fun truly begins.

During this time, I mingled with the crossdressers, and they seemed very interested in me. Some tugged at my hair in an attempt to take my “wig” while others poked at my breasts and marveled at how “realistic” they were. They asked me questions, and we bonded during our conversations. I named a few of my favorites and they loved the attention I gave them. Preferred names are Jasmine, Veronica, Jessica, or any name a “dancer” might use.

After a while, it was time for the transformation back into the alternate male form. I watched them as they sadly removed their wigs and makeup. Their clothes went back to the places in which they kept them hidden after being folded with great care. All the items were handled lovingly as they disappeared, one by one. A sadness hung about, and I could feel a sense of paranoia mixed with dread. Many checked and rechecked their items to ensure they were accounted for and well hidden.

I hope to keep studying these creatures to eventually understand them better. I have high hopes that someday they will all be free to roam among the others within their natural habitat with comfort and confidence.

From my personal experiences I think you hit so accurately the whole experience Betty. Keep up the great work hon

Betty, this was absolutely brilliant! Love it!

Doctor Goodall,
My only hope is that your research helps others understand crossdressers and their ways. ﻿ ﻿

So much truth in this humorous, tongue-in-cheek article.