Both Hercules and Achilles were Crossdressers

Home / Articles / Media Review / Both Hercules and Achilles were Crossdressers 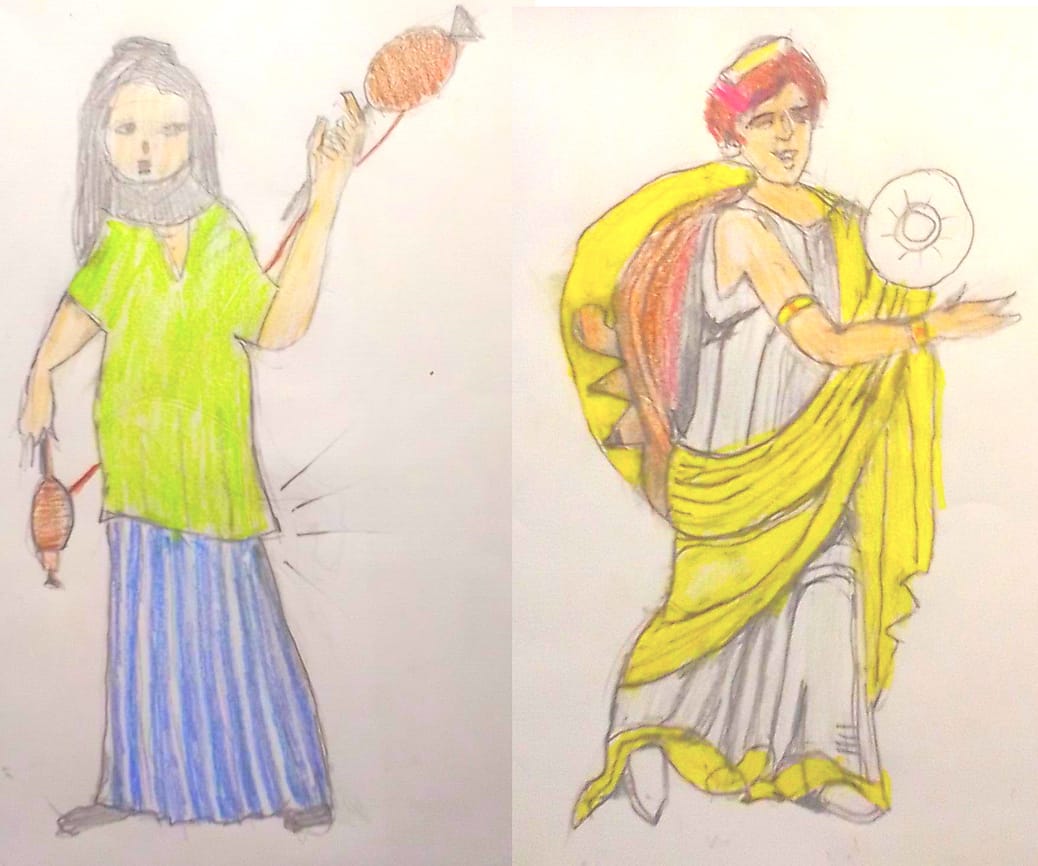 To avoid copyright issues and inappropriate images for CDH, Hercules and Achilles here are presented as fictional CDH members under the names “Herculyssa” and “Pyrrha”. Drawings by Smartina 2022.

I also know about the story of Thor’s crossdressing escapade, but the circumstances aren’t as cute. Indeed, there are several other legends about warriors offered as a veiled bride to do trickery and mayhem. Anyway…

Both Hercules and Achilles were crossdressers… yes, really!

Everyone knows about the 12 Labours of Hercules. There is a Disney movie about them. But in the late Roman Republic and early Empire, Hercules was associated with another legend, which I refer to as the “13th Labour.” Soon after completing the 12th Labour, Hercules, or Herakles, sold himself into the slavery of Queen Omphale of Lydia (it is complicated how this came to be.) She took away his club and the pelt of the Nemean Lion which he had slain, then forced him to dress as one of her servant girls, (as the picture above, which is copied from a 3rd century AD Roman mosaic discovered in Lliriya, Valencia, Spain now exhibited in Madrid), No femme name appears in this story, so I’ve named her “Herculyssa.”

In this capacity, they taught Herculyssa to spin thread. If she messed up this delicate work, Omphale would humiliate her by paddling her butt. They would tease Herculyssa about her servant girl servitude while the Queen wore Hercules’ lion’s pelt and carried his club. Queen Omphale was an unusually dominant woman for the Bronze Age Mediterranean and clearly badass.

However, after a certain period, Hercules was making love to Omphale (they ended up with a couple of kids), and he had dealt with several local monsters. Soon after that, his slavery expired, and he was back to himself. The entire episode was remarkably bloodless for Hercules. Some people believe this story is not contemporaneous with those of Hercules’ better known 12 Labours, and Roman writers fabricated it as a deliberate contrast to his previous heroism. It’s thought that the Homeric hero, over 1,000 years in the past for them, was a blank canvas for any contemporary preoccupation, although we consider that the Romans also believed these stories to be true. It is still amusing to me to think that Disney could have so easily added it to their movie, to give us a glimpse of Bronze Age crossdressing.

Achilles was another notable Greek hero who spent significant time dressed as a woman. As it was for Hercules, the primary sources are all from late antiquity (in the timeline of Greek mythology, Herakles predated Achilles by at least a generation), but there are tantalizing clues to references of works now lost during the classical Greek era. In Achilles’ case, his mother, Thetis, squirreled him away on the island of Skyros to avoid his participation in the War. The great Achilles became a lady-in-waiting of the local king, so the story goes, availed herself of access to women’s quarters to impregnate a princess. There are recorded femme names she was called by, which were “Pyrrha” (Redhead), “Issa” and “Kerkysera” (Little Tail-ender, an intentional double entendre). For many years, Pyrrha successfully evaded the draft by growing out her hair, learning makeup and posing demurely in her feminine attire, (depicted above—Pyrrha copied from a 3rd century AD Roman mosaic in Zeugma, Turkey.) She is clearly marked as a Princess with her fancy hairdo and makeup, delicate earrings, copious gold jewelry, gold headband and gold silken cloak. Odysseus flushed her out of hiding, as she instinctively reached for a spear at the sound of battle and the war horn. Thus “He” went off to the Trojan War and the rest, as they say, is history.

While an end date for this tradition is established by Zeugma’s destruction by the Sassanids in 253 AD, we have a nifty start date provided by the moment that Vesuvius erupted in 79 AD and buried Pompeii. Although the eruption burnt much to cinders, it preserved fragile wall paintings in fine volcanic ash. They found painted pictures of both the Hercules and Achilles crossdressing stories, in a number of different houses.

For me, the most relevant data is less the likelihood of Hercules or Achilles being actual crossdressers than it was the Romans who produced and enjoyed this crossdressing art, with the idea that it was some kind of sexual or cultural preoccupation for them. We find illustrations of the Hercules stories and the Achilles stories nearby each other in Pompeii and they are thematically connected, by not much other than crossdressing. We could even gain a sense of a metropolitan Roman tradition spreading out along the tentacles of the Empire to Spain and Turkey. While they were only two stories out of the thousands from Greek and Roman mythology, we find on a Roman decoration; they were mainstream enough in both cases to go full mosaic, which was an expensive and complicated undertaking for the average Roman. The Hercules story is like the French Maid of its time, while Achilles has all the beautiful robes of a Princess. These Romans were themselves likely crossdressing and role-playing and going to see these stories acted at the theatre, making them, in some sense, our predecessors. It’s also worth mentioning that they revived this art form in the Renaissance.

People rarely associate either Hercules or Achilles with crossdressing. Both Hercules and Achilles are archetypes of the manly hero, Demi-gods of testosterone. Yet for quite a lengthy period, both were required to mince around like proper ladies with Bronze Age bronzer in their flowing robes… Who’s to say they didn’t enjoy some of it?

View all articles by SmartinaTags: crossdresser resources Crossdressing in history

Here are some captions drafted for each of the drawings and their relationship to the Roman originals. Herculyssa View original here. The Herculyssa Mosaic is part of a much larger piece depicting the 12 Labours around the edge with this manifestation of Herculyssa prominently in the middle, as if it is in fact the most important piece, more important than the 12 Labours. In this scene she is being taunted by Queen Omphale with a leather paddle, who sits on her throne with the lion pelt and club. The piece is otherwise devoid of background or other scenery. Some parts… Read more »

“Who’s to say they didn’t enjoy some of it?” That question might be asked of many who wear female attire or jewelry, even manly men. Consider men dressed as women in Shakespeare plays (or current plays, for that matter), boys who had their testicles removed so as to sing “castrato” parts, and a variety of other activities where it is presumed men are only “acting” a part. Many CDs are known to volunteer for female parts in performances or events where such parts are assigned to boys or men and often are propelled to go further as a result. If… Read more »

Thanks for your comment, Rhonda. “Stage Beauty” is an interesting film covering the transition period from male to female actors (for female roles) in English theatre during the reign of King Charles II, through the story of Edward Kynaston, one of the last “boy players.”

What a glorious read to know that two iconic warriors had a gentle side that wanted others to put down their swords and realize that there is more to living than violence. Can you please provide links to your sources so that we can all learn more about these ‘warrior maidens’?

Thanks Isabelle! Links to the mosaics are found in my first comment. For the info, Wikipedia has an article for Achilles on Skyros, while Omphale is the keyword for Hercules’ stories. Achilles was the first story I became aware of through the writings of Robert Graves’ collected Greek Myths.

I LOVE this article! Yes – you are quite correct about both Heracles and Achilles, but my own personal preference is not Greek mythlogy, rather Norse – and in particular the story of Thor recovering Miolnir and having to dress as a woman in order to do so. The idea that his eyes were so scary because he was tired, having been so anxious to rush to Jotunheim and become Thrim’s bride is hilarious; frankly, it’s clear that Thor dressed as a woman because he wanted to – not just because he needed to recover his hammer! That could have… Read more »

Hmmmm… That’s an idea! Maybe an article telling the story, outlining Thor’s history and pointing out the hints and clues… after all, anyone who tries to be that macho obviously has something they don’t want to tell the rest of the Gods… It’s now just gone 1pm in my neck of the woods and – would you believe it – I have to go and start the initial preparations for dinner tomorrow. (I’m an Atheist and want nothing to do with christmas, but my wife and kids expect a decent dinner… which means I’m the only one who can do… Read more »