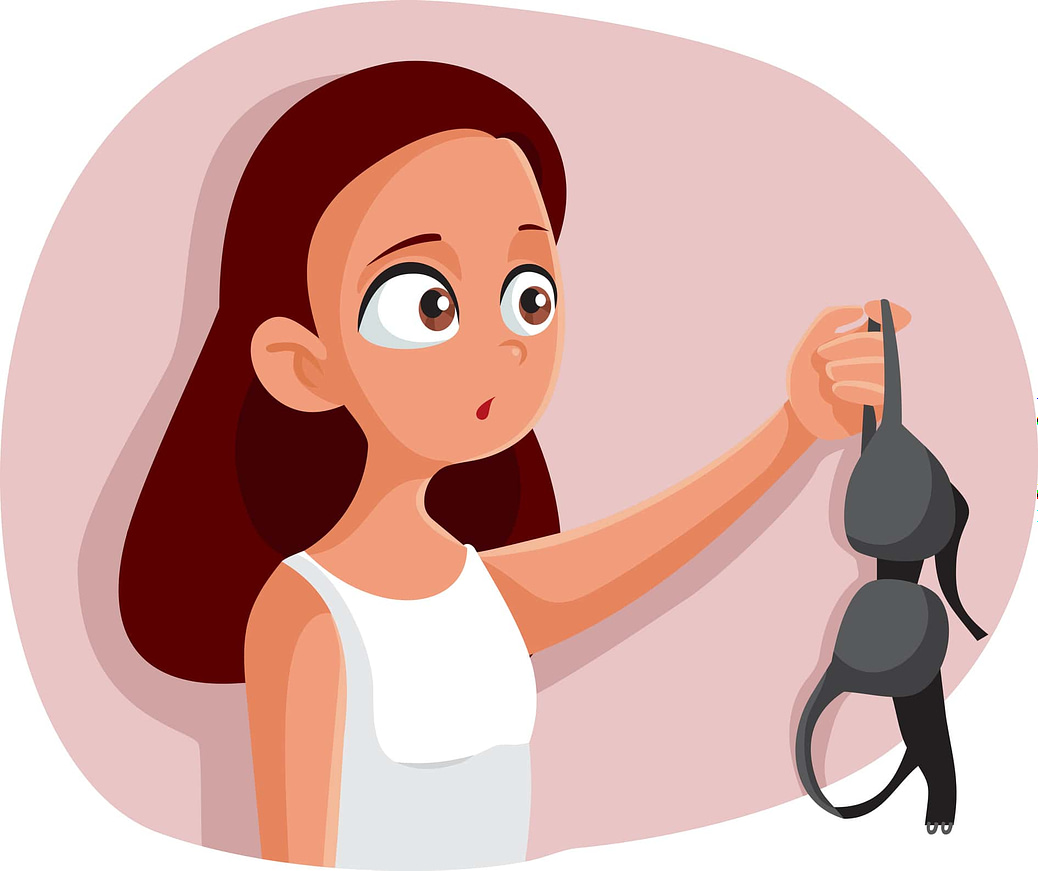 After being invented in 1914 by Mary Phelps Jacob to replace the uncomfortable corset, the bra started out as a piece of clothing exclusively for women. Girls who started to develop with puberty, but who didn’t have enough breasts to fill an “adult” bra, usually wore a slip or vest under their clothes.

A few years later, some models of bras for teenagers began to shyly develop. But this piece only became popular in the ’50s, when the media started to highlight women’s breasts – and this was reflected in society, including teenagers.

Doctors began to recommend that teenagers wear bras to avoid sagging and problems while breastfeeding, while teenagers themselves and even their mothers saw in the bra a way to improve posture and presentation. The companies also wanted to profit by selling bras for teenagers, with the of the media and even magazines for teenagers.

Once the breasts became symbols of femininity, the bra became a consumer dream for teenagers. Even girls who, at the beginning of puberty still did not have breasts wished to wear a bra just as they wished to wear high heels or lipstick.

For this audience, the “training bra” was created: a light, soft, wire-free bra without a bulge – sometimes with a light pad to protect and shape the breast bud (that lump that appears around the nipples at the beginning of the development of the breasts), preventing them from marking on clothing. In practice and contrary to the original idea of the bra, it offers little (perhaps none) support for breasts. It serves as a “transition” piece for the girl to get used to wearing a bra.

Even girls who had not yet developed a breast bud, but who were of pubertal age, wanted to have bras. The bra has become a symbol of a ritual of passage from childhood to adolescence. The “training bras” advertisements in magazine and catalog ads played on this.

In one of these ads, there is an image of a mother with her daughter wearing a branded bra and above a caption saying that “an understanding mother knows that her daughter’s desire for her first bra is more for emotional and psychological reasons than physical ”. The advertisement also highlights that its product is developed for girls from 9 to 16 years old, they have cups that expand as the breasts develop and that help to develop confidence not only in themselves but in their “understanding.”

Most “training bras” advertisements followed this script, mainly with images of mothers dressed in nightgowns hugging their daughters who wore bras. In fact, the target audience of the advertisement was not only the girls but also their mothers.

The message being propagated was that the “first bra” is a milestone in the girl’s life and a moment that unites mother and daughter.

Of course, not all girls started wearing bras. Some found them uncomfortable, others were embarrassed (being the first or the last of their circle of friends to start wearing one), and others started using it without having breasts because their friends were. So much as it happens yet today.

There were also people who were against training bras. The arguments were that the “training bras,” because they are not pieces designed for support promoted the sexualization of adolescents.

Today, the concept of “training bras” has started to reach adult audiences too! There are the famous “bralettes.” They are lightweight bras, usually wire-free, bulge, and in some cases come without hooks and have won over the adult audience for their style and comfort. With the pandemic, they gained more usage as women who stayed at home decided to adopt more comfortable models of bras, (such as bralettes.) Of course, the bralettes developed for the adult audience have more daring styles (lace, cleavage, colors, etc.) than the training bras of the teenagers …

– Would you wear a training bra as a teenager?

– Have you ever worn a training bra?

Hi Maria Thank you for your very informative article. There was one item that did me a little tingle I believe a woman’s breast have ALWAYS been a symbol of femininity since the beginning of time I am sure the bra was a welcomed Item after having to deal with wearing a corset. The corset had its value by accentuating the female shape which we all love. The training bra!!! Training a young girl for a life of discomfort?. There is nothing more attractive to me than seeing a woman without a bra. Your are right a woman breast are… Read more »

Marie, Thank you for some fashion history lessons on the training bra, and yes, I do remember the “training bra,” particularly during my pre teen and early teen years in the late 50s and early 60s. Although I never actually wore a training bra, I do recall seeing them and seeing GGs wearing them. I recall how tiny they looked, when compared to a regular bra. When I cross dressed as a pre teen & early teen in the late 50s & early 60s, I wore a regular bra, a playtex living girdle, and stockings, all of which was standard… Read more »

Training bras were a fascination for me as a young boy becoming sexually aware. Partly because I wanted to wear one but mostly because I wanted to take it off of the girl that was wearing it. I think the training bra was a sexualization of adolescent girls, and it worked. The training bra was a learning tool for me, how best to remove it and get to the prizes below. And I practiced whenever I could find a willing participant. My first experience was at 11 and she was 12. It was awkward and fumbling but created fond memories.… Read more »

Very interesting article Marie. As a young ‘dresser’ I was a little jealous of my sister getting her first trainers as she could now wear everything our mom did and was now beginning to mature physically. It was also something of hers that I could borrow in secret, but had to return to where I found it and could not have one of my own for my stash, without her missing it. Once mom got her the first proper bra to wear, her trainers went to the waste basket, only to be rescued by me as soon as I could… Read more »

Thanks for your comment, maybe one day boys who want to wear a bra can wear it without being taboo.

Hi Marie Claire, thanks so much for the interesting article. You asked a few questions. If I were a teenage girl, yes absolutely I would wear a training bra. I have tried one on quite a few years ago. Bralettes? I absolutely adore bralettes – I’m wearing one right now as I’m typing this. Actually I’ve been wearing it all day. I’m retired so I get to dress en femme all day. I took the dog for a walk this morning en femme and met a few other walkers along the way. No problems at all. And I just got… Read more »

I love articles like this. Thanks for doing the research and presenting it so well.

Ty Maria for the article. Yea I have been wearing braletts in male mode for a long time when not en femme. I just adore the feel and effects my behavior as well.