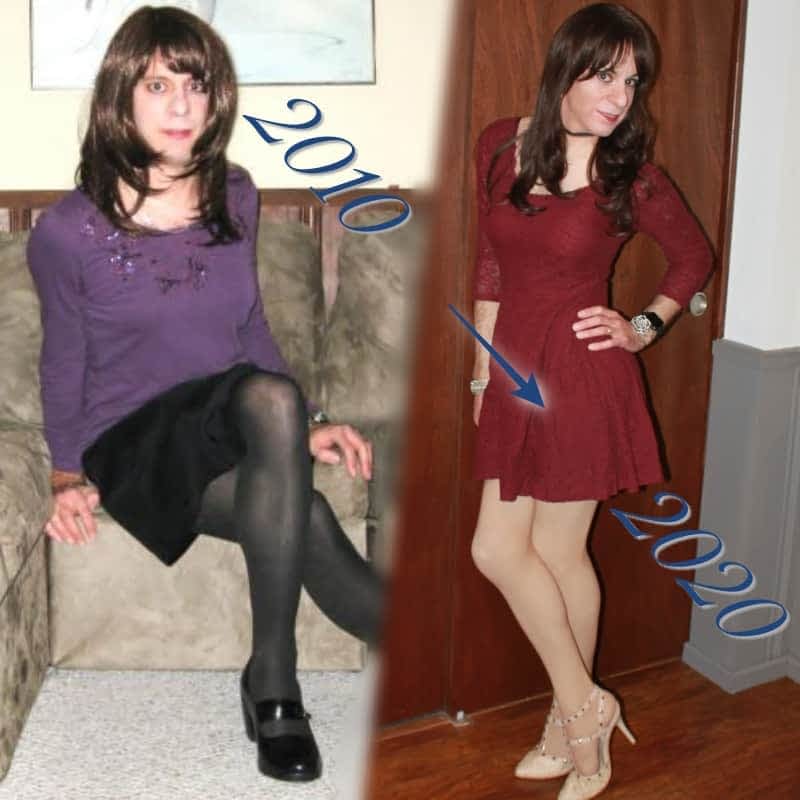 I had never been more convinced that I was finally giving up crossdressing for good. I was sure this was the only way forward. Even though my wife never asked me to stop, when I saw how upset it had made her, I was determined to never do that to her again. I told myself this was what I wanted. Period – end of story. And for about 24 hours, it felt really good. I told myself that I didn’t have any regrets, that I had done what I had always wanted. There had been many opportunities to dress up fully like a woman, and now I could now move beyond it. But seemingly without warning, I started to feel “off.” It wasn’t that I felt the urge to dress, I just felt a sense of unease – something definitely wasn’t right.

When I say I purged, I didn’t just get rid of all my clothes. I deleted every online account, every photo, every trace of femme alter ego vanished into the digital abyss. The only account I couldn’t close was my login for the crossdresers.com forum – so I blindly changed my password to gibberish so I could no longer log in. I began having trouble staying asleep, sometimes waking up in the middle of the night with unexplained pains. For weeks on end, I couldn’t shake this unsettled feeling in my gut.

By the following January, something had shifted. I believe that through the work I was doing with my therapist, I was nearing some sort of clarity about who I was. Something I had always struggled with was the sexual aspect of crossdressing, and I was still holding onto a lot of guilt about that. Some part of me believed that my sexual attraction to dressing like a woman and my sexual feeling towards my SO were mutually exclusive – that the only way to be there for her was rejecting my feelings about wearing women’s clothes. And therein lay the first breakthrough. Sometime that month, it dawned on me that I never deleted my Instagram account. So, I logged on, hoping I remembered the password, and sure enough – there it was. As I scrolled through the dozen or so photos I had left there, that feeling returned (I’m sure you know the one I’m talking about…). And with that came the realization that this is who I am too. There’s a lyric to one of the songs I’m writing for my album that goes, “You are not one without the other, you’ll never be complete.” I had set myself up for frustration by convincing myself that these two parts of life, especially sexually, could not co-exist. And once it dawned on me that I could be both, and that it was ok, I finally began to accept myself for who I am – all the bits and pieces, peculiarities and proclivities, boy and girl. My biggest challenge in therapy has always been the struggle to get that place of acceptance. No matter what my therapist did, no matter how many articles I read online, I just needed to get there in my time.

I consider this event the true birth of Lexi.

The first thing I tried to do was get back into that crossdressing forum, because I had shared some photos there and wanted to reclaim as much of my past as I could. Unfortunately, since I had deleted the e-mail account associated with my login, there was no way to retrieve my password. And the admins over there are pretty draconian! I was able to get back in touch with one of best friends from the forum, so she grabbed as many of my pictures as she could and sent them over to me. The resolution is pretty low, but it was better than nothing. I setup a new Flickr account and tried to connect with as many old friends as I could over there. But what I really needed to do was go shopping! During the last purge, I dumped literally everything, so I needed to get a wig, bras, makeup, everything. Over the course of several weeks (and several trips to Payless, Target, and Ross), I was back in business. The green dress in my cover photo came from that initial shopping spree. I’m not sure if it was the better-quality wig, my improved makeup skills, or my new outlook on life, but I had never been happier with how I looked and felt when dressed en femme.

I wish I could say that my saga was complete, and we all lived happily ever, but if I’m being completely transparent, the ending of the story is yet to be written. In an effort to respect my wife’s original feelings on the matter, I’ve chosen to keep it to myself for now. While not ideal, it has allowed me to grow more comfortable in my own skin. The tales I’ve told about going out in en femme while in public, the hundreds of photos I’ve uploaded to Flickr, the video blog I’m doing where I actually speak…these have all been steps on the path to self-love. All the things I love most about me are being synthesized into one awesome whole, and I know at some point we’ll have to have another go at explaining all this to my wife. In hindsight, my biggest mistake was that I tried to tell her about the crossdressing before I was ready. She had questions, and I didn’t have the answers, or very possibly, the courage to be honest. But being Lexi has helped me move closer to the self-actualization required to have an honest conversation. And I don’t know that this journey has an end – does it ever, for anyone? But the past 12 years have been a challenging and frustrating, yet amazing period of growth. So, I’ll just keep putting one high-heeled foot in front of the other, and trust that if it feels good, it is good!

Thanks to everyone who has hung in there with me on this multi-part saga. Hopefully, you learned something that might help you out, but if nothing else, I hope you were at least mildly entertained! Please leave me comment if there’s any question I’ve left unanswered in my article. I’ve also posed some questions to you noted below and if you’d like to answer one or more of the questions I’ve posed to you below, I would love to hear from each and every one of you fine ladies out there!

waw Lexy ! Your story is taking me really nervous, or better, shaking from top to toe, I’m very excited with this all, I still here imagin if it hapens to me, I can’t afford it, let me calm down.
Thanks to share with us

Thanks everyone for all the great comments and answers to the questions! I appreciate everyone’s support and I love hearing from you. I apologize I haven’t been able to respond to you individually, things have been a little crazy lately. Hope everyone is staying safe and healthy. Cheers!

Thank you so much for your article Lexi. Sounds a lot like my story. I have purged three times over almost 40 years, one because of a relationship, and the other two as I agonized over what must be wrong with me that I would want to do this. Finally, after years of therapy and recovery from alcoholism, I came to terms with the fact that Rachael is half of who I am (the better half, LOL) about ten years ago, and went to get my first makeover about 8 years years ago. The rest is history so they say.… Read more »

I can’t count how many times I have purged all of my clothes and accounts.The last time I purged was back in 2016. I had an accident where I fell and dislocated my shoulder and torn some ligaments. At the time I lived alone and I was afraid my two sister and brother in law would find my stash. So I purged it all. After a couple of surgeries I started buying new lingerie and clothes. Then in 2017 I purged again a long time friend came back around and one thing led to another and we got married, didn’t… Read more »

Thanks for sharing. Sorry to hear about your divorce! Good luck with your re-feminization…

I can’t begin to say how many times I have purge, but that feeling always comes back. There have been accounts I deleted or closed only wishing I had access to them one more time. I do have seperate email account one for my male self and another for my female self. I spend more time on her web-sites. I have been spending more time as my feminine self and finding reasons why I can’t do something with my male friends. I would rather stay home and be her.

Ugh. Purged a huge collection of clothes recently because I am ashamed of who I am. Threw my femme life, which had taken months to build up, in the trash. I am really turned on by crossdressing and that is the part that always leads me to thinking I’m doing something wrong, when all I’m doing is feeling good and expressing myself. I am not hurting anyone! Thank you for this article, I sooo relate, and it gives me hope that I can one day accept this part of my life for what it is. Going into town today with… Read more »

Glad you liked it – it’s been a while since I wrote this one, but I’l sooo glad it’s helpful. Cheers!