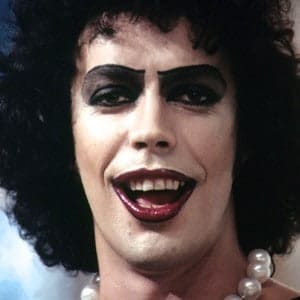 Whatever happened to Fay Wray?
That delicate satin draped frame
As it clung to her thigh
How I started to cry
Cause I wanted to be dressed just the same

I want to thank Michelle Liefde for giving me really good insights about why Rocky Horror Picture Show is still popular and relevant today. When discussing this movie, she told me,” I always thought Richard O’Brien created something that reached to all of us that feeling of not fitting in and being considered weird or deviant. And when faced with someone that has embraced it, a twinge of awakening of feelings that you have long since buried.” This is probably why I was so uneasy about this movie for such a long time. I was attracted by the decadence from what I seen from the clips of the movie. Yet, I was afraid of what I was feeling when I saw the clips from the movie. When I watched this movie recently for this article, I realized I have never sat down and watched this without any distractions around me. Most of the time, I have seen this playing in a bar. (Yes, I have hung out in some interesting bars in the past.) Watching the movie this time, I no longer felt that anxiety. I was able to enjoy the movie and appreciate the anarchic mélange of classic B-movie homages, catchy rock songs, and the celebration of gender identity and sexuality.

I feel I should give you, the readers, some warning that I am about to talk about some words that are considered offensive at worst and politically incorrect at best. I have never been a fan of holding works of art of the past to contemporary standards. Part of appreciating a work of art is understanding the times when it was created. Nobody can’t talk about Rocky Horror Picture Show with mentioning the showstopping tune sung by the iconic lead character. If you feel that those words are too offensive for your sensibilities, I would understand that you don’t want to continue to read on. For everyone else,” Enter At Your Own Risk!!”.

Of course, the song that I am going to talk about is Sweet Transvestite. This song is one of the best introductions that a movie character ever had. Tim Curry strut into that scene with such a confidence that we all wished we had 1/100 of that confidence for everyday life. I was always baffled by that ”trans” alliteration in the song, ”I’m a sweet transvestite from Transexual Transylvania.” Did you notice that I capitalized the last two words? Later on, in the movie, it was revealed that Dr. Frank-N-Furter was an alien from a planet called Transexual from the Transylvania Galaxy. Finding that out made me wonder if cross-dressing is normal on that planet. That is putting too much thought into this movie.

People do insist on being identified with words that are slurs now, but wasn’t in the past.  Also, there are people who insist on using “acceptable” words that were slurs in the past.  I understand the emotions that certain words do produce.  There is one word for me.  If anyone used it as a pejorative against me, I would punch them.  We should be respectful for the choices that people make for themselves.  Even if it’s not something that you will choose.  Like identifying as “transsexual” or “queer”.  I think George Carlin said it best, “There are no bad words.  Bad thoughts, bad intentions, and words.”

One thing I found interesting was reading the YouTube comments in response to Rocky Horror Picture Show. There were a lot of comments from people how finding Dr. Frank-N-Furter attractive was challenging their sexuality. Not just from heterosexual men, but also lesbians. It’s amazing to see after all these years, this movie still challenging conventions that people still cling to. One reason for the on-going appeal of the movie is how sexually appealing Dr. Frank-N-Furter is. Tim Curry gives a well-rounded performance of someone so over-the-top. I actually felt sorry for Dr. Frank-N-Furter at the end.

Ever since I came out, I have been more open to things I would have rejected out of hand as being too taboo. Especially, when it comes to sexuality. Rocky Horror Picture Show is a celebration of personal freedom regarding sexuality and gender identity. It is brilliant to contrast that liberation with sexual repressions of the past by constantly referencing classic movies. The loss of innocence of the” A Hero” and” A Heroine” seems like the mission statement of the movie. When they let go of what they thought is the appropriate way to behave, the happier they were. Rocky Horror Picture Show isn’t a preachy movie. It’s a fun, rollicking romp of campy sci-fi, horror movies set to a great rock and roll soundtrack whose songs will be stuck in your head for a long time.

Remember it’s a just jump to the left and then a step to the right.

Tags: being who you are

I remember a few years ago everyone was telling me that Rocky Horror Picture Show was no longer relevant but they are so very wrong. There will always be those feelings of not fitting in or trying to hard to do so and the secret hope that we can be free to be who we are. I for one will always have a place in my heart for the film, the movie and of course the corsets and fishnets! Great job, Jaime, thank you for another incredible and insightful review on a movie that is near and dear to my… Read more »

Love it. Rocky Horror was a big part of my teenage years, and it will always hold a special place in my heart.

I can remember when Rocky Horror was a popular Halloween event on TV. I was both drawn to it and repulsed by by it at the same time…this was long before Bettylou emerged. I’ve seen it in bits, but never the entire show from start to finish. I must do so, next chance I get.

Thank you, Jamie, for the interesting take on that film. I tend to be like Bettylou, whose comment is lower down. I’ve seen bits and pieces of the film, and likely all it, but never all it at once, and my last viewing was a long time ago, and long before Amy came into the world.
This makes me want to sit down and see the film again, and from start to finish.
Amy