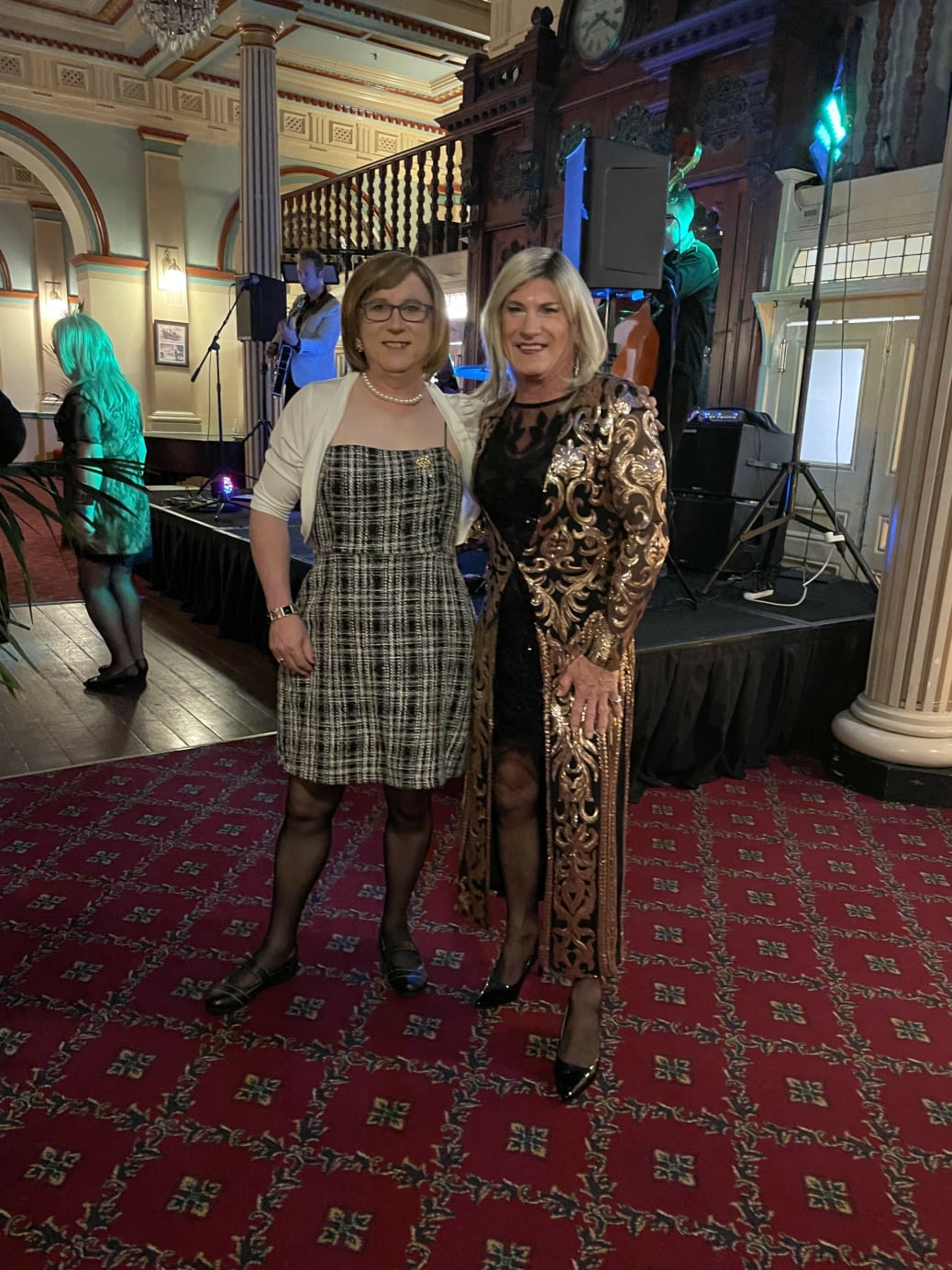 My name is Geraldine, and after many years of secretly collecting female clothes (over two marriages and with many purges) I only started to actually dress up and transform myself in 2020, in my mid-fifties, and I almost immediately ventured “out and about” En femme.

I met up with a couple of individual crossdressers En femme for a drink in the last two years. Then at TransActShon in 2022 at Katoomba, NSW (14-16 October 2022) for my first CD group event. They held it at The Carrington, an iconic Blue Mountains hotel that opened in 1883, and which still retains its vintage charm. My room was lovely, and the staff were friendly and helpful.

There were girls from as far away as Western Australia to Far North Queensland to Tasmania. While I think most people would describe themselves as part-time male-to-female heterosexual crossdressers, there were also girls who had transitioned, and without a doubt, many with diverse sexual orientations. It was great to talk to people about their journeys and experiences, and it made me realise even more that I am a proud member of a normal subsection of society. I met somebody who told me about a CD social group in my home city. While my wife (who declined to attend with me) was afraid that this event might turn into a sex fest, I was only propositioned once, to which I gracefully declined.

Friday afternoon, I met up for drinks with a town of Katoomba En femme and had coffee with new friends, AND grabbed a few cans of beer from a regional craft brewery to take home. with a contact from CDH’s “Cross Dressers of Australia” Group before changing clothes for the official evening welcome session. They held it in one of the function rooms where we meet more people, saw a Burlesque show, and had a quiz game (with lots of questions that seemed to relate to the male appendage!)

On Saturday morning and afternoon, we explored the town of Katoomba En femme and had coffee with new friends, grabbed a few cans of beer from a regional craft brewery to take home.

The main event was the Saturday evening dinner and dance, where everybody wore their most glamorous dress. After dinner, I joined some people in the hotel foyer, where it was easier to chat. Hotel guests who were not there for TransActShon seemed to look on with bemused smiles, enjoying the unexpected spectacle. I believe we all had a great time. My only drama was that as I came down the carpeted stairs, both of my heeled court shoes went flying off and I landed on my bum! I quickly regained my balance and dignity, put my shoes back on, and reassured concerned onlookers I was OK.

I was thrilled with the three dresses that I wore over the weekend (see my public photos). I wasn’t going to wear them at the mall! While I’m still not entirely happy with my makeup skills, I believe I’m getting better. I painted my own nails, rather than using my pink press-ons. They looked OK after a bit of cleanup. On Saturday, I covered up an upper arm tattoo with makeup because I was wearing a strappy dress. However, while I achieved good total coverage, I couldn’t really get the makeup to blend in perfectly with my skin tone, and so I ended up covering the area with a bolero top.

By Sunday morning I felt socially exhausted, and instead of getting dressed up for breakfast and more mingling, I just drove home early in drab and had an early night.

I wasn’t sure if this was the kind of event I would enjoy because I’m always happy to go out solo. In the past, I’ve thought that going out with other crossdressers just draws unwanted attention, and that being with girls who are too “girly” might make me uncomfortable. But this was a great event, and I enjoyed it, and I feel sure that I’ll do it again. It makes all the difference when you’re among friends and in a safe space. Hopefully, I’ll also attend some smaller local social gatherings.

Thanks so much to the TransActShon organisers and supporting commercial partners. As somebody who has organised many professional events, including a national conference, I know how much work is involved.

Sounds like you had a fabulous weekend. There are support groups here in the Netherlands that organise monthly meetings but nothing on the scale of what you just described. I thought the comment about the ‘sex fest’ hilarious, my wife has the same idea I think, I keep telling her these meetings are more like a bunch of train enthusiasts but sharing make-up tips and talking about how we navigate through life as a dressed in female apparel instead of the latest diesel electric train. I’d go to a weekend like that as well given the chance. Like you I… Read more »

Thanks Helene. It really was great fun. I’ll be flying over the Netherlands on Wednesday 16 Nov when I go home to Ireland for a wedding 🙂

Do you get to spend some time here or is it just a connection vi Schiphol?

I only ‘flow over’ on my way from Munich to Dublin. No stop

Thanks for sharing it sounds like you had a lovely time there. I loved the pictures that you posted you looked lovely. I can’t wait to to follow your foot steps and attend my first one too. Hopefully I can avoid the stairs incident.

Thanks Susan. Getting to wear evening dresses in public was probably the best part, and of course getting to talk with other crossdressers.
Geraldine

What a lovely event Geraldine. I have never been to an event as grand as that. I love your outfits, you look very nice in all of them.

Thanks Angela. I’m so grateful that are people who give up their time to organise these events. Hopefully the first of many
Geraldine

Thank you Geraldine for sharing your experience at TransActShon.with so many details..you look so lovely in your photos . in the USA we have a Keystone very similar to your conference… Keystone will be held March 2023… and many like minded ladies from CDH attended Keystone 2022. Your experience and the CDH 2022 attendees have inspired me to attend my first conference…

Thanks Leonara. Go for it!
Geraldine

Hi Geraldine sounds like you had a great time, I’ve always wanted to attend a big event like that and spend a whole weekend or even a full week being Rozalyn, I must say you look fabulous and i love your dresses X
Hugs Rozalyn X

Thanks Rozalyn. I’m in Ireland now for 2 weeks and will be able to be Geraldine for 3 days in a row next week.

Glad to see you had such a nice time Geraldine. I went to my first group get-together last week at a private dinner for a dozen CD’s/trans ladies. It was so nice to meet like-minded people where I could just relax and not think about all the things we need to be constantly aware of when out among the general public.

I agree Fiona. It’s nice to be in a relatively safe space.

Hi Geraldine, Well done on getting to TransAcshon and I love your photos. Those pesky Carrington Hotel stairs….They got me at Transformal 17 on the Friday night,when one of my heels slipped off the stairs on the way up to my room and wrecked my creaky old back. As I’ve written here in the past, I then spent the Saturday trying to find a chiro to get me right for the formal on the Saturday night. It’s great to read how you “young things” are still able to go to events like this…May you attend many more of them… I’ve… Read more »

In Dublin at the moment, and had a lovely City pub crawl this evening as Geraldine with one of my sisters. Wonderful experience – and great to have somebody I can borrow clothes from (like a warm coat)