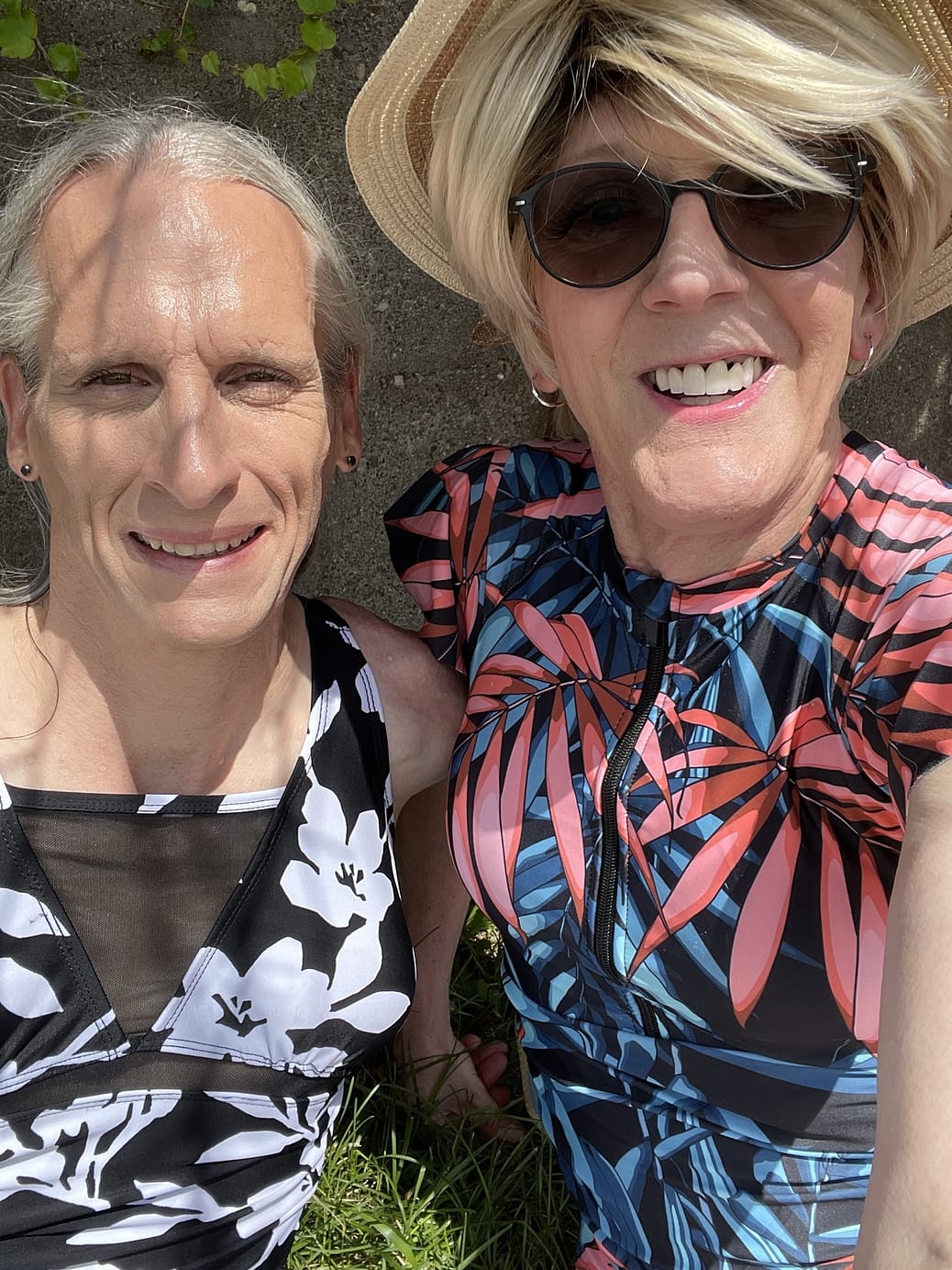 I attended a local Trans Pride Pool Party event in downtown Pittsburgh on August 6. Our local Meetup group had two of us in attendance, organizer Lynn and me. While the event was low-key, I enjoyed the sun and company of Lynn even if the overall turnout was not strong.

They held the event at the Bloomfield city pool in Pittsburgh, tucked in the middle of an established neighborhood, and it was clean and inviting. All the staff were friendly and respectful. Soon after I arrived, the local Meetup group facilitator, Lynn of PA (here on this site), pulled up and we met under the shade of the only small tree. I already felt the sun’s rays, and I hoped this would not be a short outing. My skin hasn’t seen significant sun exposure for at least 2-3 years.

We moved over to a grassy area on the far side of the pool, where most of the patrons and places to lie out were available. I put on so much sunscreen, I couldn’t tell if my skin was glistening from it or my perspiration, or both. The temperature wasn’t too extreme, close to 90 F, but early August is still a high sun angle, so I felt it affecting my skin after just several minutes, so I draped my pink, sheer drape over my legs and feet.

About a half hour in, some friendly but heavy-looking clouds rolled in, and I had a reprieve from the baking sunshine. A cool breeze signaled a rain shower was about to move in, which was very welcome to me–at first. Initially, the rain was refreshing and cooling, but as it got a little steadier, it got cooler than we liked, plus our stuff was getting soaked.

We took shelter in the Ladies’ locker room for a few minutes as the shower passed. They did not make us feel unwelcome, even though there were genetic women and moms with their young girls there as well. Everyone just stood and waited for several minutes. Thank goodness there was no lightning or thunder!

The event was low-key. There were no banners or signs to direct people to the parking area or the pool entrance. Inside the fence, there were no tables or any Trans Pride organizers that we saw or met. There were eventually several trans women and men there, as well as a few people that had a flag or beach towel with bisexual colors. But people who did not already know each other tended not to mingle, and that was fine.

But we both thought it strange that it seemed like any other summer weekend day at the pool. It was never at all crowded–most of the time there; the lifeguards outnumbered the patrons. So that was a bit of a letdown. I had looked forward to meeting new trans people and allies.

This outing was a big “win” and a first for me in multiple ways: my first time out in public in any ladies’ swimwear, my first time wearing ladies’ swimwear with no shapewear or body hair to camouflage, and my first city-sanctioned Trans Pride event. (I could not go to the Pride march in June). I was a little self-conscious at first, especially when there were so few people there.

But there were no side glances or double takes, no comments, just everyone enjoying the sun and water. You can do this, too, if you just choose to step out in confidence! The world is not sitting in judgment of people different from them, despite all the negative headlines and online posts about the hatred the conservative right puts out. Everyone else just wants to live and let live, in my experience.

I must admit, being 5′-7″ and slight-built, I may have a bit of an advantage, but millions of CDs and TG people taller, bigger, and less feminine than I are living their lives authentically. Of course, never put your safety, your livelihood, or your marriage at risk, but do some little things to boost your confidence regularly. Life is too short to live it in fear!!

Hi Brielle. All in all it sounds like a lovely day. I must admit that I am jealous I have always wanted to attend a pool party like that.

Hi Susan, it was a great day in total. it felt so good to wear a ladies swimsuit with nothing else on underneath (giggles). and i really enjoyed the one on one time with Lynn!

Nice pic Brielle, I used to have a one piece that looked alright. Now that I have to live with heart meds I suffer from one of the side effects, swollen lower legs and feet. So wearing a swimsuit is no longer a viable option.

Hi Lauren, thanks! at least this year, it is one and done. lol. But next year I look forward to spending time at my apartment pool

Hi Brielle,
So nice to see you getting out and enjoying your feminiity. There is no easy way to explain to someone how good it feels. I recently went to an event where I swam in the pool with other members of the LGBT community. The event had been postponed the last 2 years due to the pandemic. It felt so good to swim in my bathing suit again. Keep living your life !
Hugs Terri 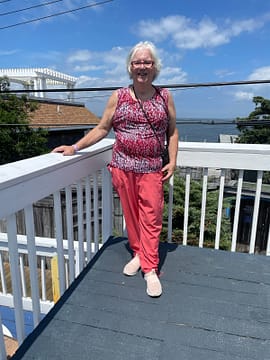 Wow, Terri, you look great! Where and when was that taken? I’m a little sorry I didn’t even get in the pool to wade, but I was so afraid to wash off my sunscreen (hadn’t been in the sun at all for the last 2-1/2 years, really). But it wasn’t too much of a social interaction with others, so it was fine. I also still need the wig. I’m letting my own hair grow, but may never feel comfortable with it.

Anyway, thanks, and glad you had a nice pool party experience too!

That was a couple of weeks ago on Fire Island. Took a dip in the pool later. Was a fun day

Hey, Brielle! Enjoyed your story. Three of us gals from Northeast Ohio will be at the 5801 Video and Lounge around 6:30 pm this Thursday before heading over to the Blue Moon later that night. Feel free to join us. Look for me (African-American, six feet tall, size 12). Hope to see you there.

Hi Elle, I would have loved to join you, but I had a dental bone graft and sinus lift in preparation for implants later this year. My face looks like I hit the airbag without a seatbelt (no joke – the swelling and bruising looks terrible!). No pain, but with the healing just in it’s 2nd full day, I will not be out and about socially for a while, I’m afraid. PM me if you get together up there or in the ‘burgh again. The 5801 is very chill and usually not crowded at all, and the Blue Moon may… Read more »

Good morning, Brielle. Sorry for just now reading your message. So hope you’re feeling and looking like yourself again. I plan to be back in the ‘Burgh again soon. It’s one of my very favorite places to dress and a pleasant ride from where I live. I’ll def let you know, girl.

okay! sounds good. I’m back in circulation now (LOL). DM me and we can trade info if you are comfortable with that.

Very comfortable with that, Brielle. As a matter of fact, just email me your contact info at petrajonson@yahoo.com, and I’ll return the courtesy. So glad you’re feeling better and are back in circulation!

what a fabulous outing Brielle

Thanks, GF. It was fun, but a bit strange there wasn’t more organization by someone.