The Convenient Women: A Response to a Dismissive Transsexual

Home / Articles / Hodgepodge / The Convenient Women: A Response to a Dismissive Transsexual

I’m sharing here an essay I wrote in response to a note a I received recently from a pre-op transsexual that included, among other things, the following sentence fragment: “…but you are just a crossdresser; you can’t possibly understand what I am feeling about that.”

Obviously, it was the “just a” in that sentence that got to me.  I thought we had gotten past all that class warfare on the trans-spectrum.

Here’s my response in the form of an essay.

There are those among us who can choose to be women, but do so only whenever it is convenient and whenever they feel like it.

So I say to the dismissive transsexual: often those “just crossdressers” can be quite wonderful and happy as occasional women, even if only for themselves.  Often, while choosing to be women, they can look as good as and move with as much grace as any women, transsexual or cis-born.  And dress as well.  And unselfconsciously feel things with the same woman’s natural sensibilities.

Often, they are long passed the time when their sexuality was centered on their clothes, and instead the pleasure is just in being a woman in the world …  but doing so only occasionally.  Some of the lucky ones even find themselves in comfortable, even passionate, even if intermittent, relationships as a woman … and with a man or a woman, as they choose.

I admire transsexuals, the ultimate existential heroines, women of courage choosing to live their lives as they were meant to, being their ‘true selves’ no matter what tricks nature and fate have tried to play on them.  But, for some few, their own struggles have made them too dismissive of others on our wonderfully varied transgender spectrum.  Ironically, for some, it is their own lack of free will, lack of choice, that they claim as the justification for their attitude.

I’m saddened by the last vestiges of class warfare in our community, especially from those who claim political correctness, but can’t suppress their lingering perceptions of the crossdresser as being, somehow, of a lower order of being than themselves.

As the politicians say, let me make myself clear: I find that most transsexuals nowadays are past all that, are fully respectful of us all.  But, for those that still succumb to it, this touchy defensiveness and unworthy disdain exposes a nerve of protest-too-much self-doubt that is embarrassing in its obviousness.

Get over it girls.  We’re not better nor worse than you.  We’re just different.  Let us be.  Celebrate us, as we celebrate you.

We are free.  And our courage is in recognizing and acting on our freedom … whenever it is convenient  and exactly when and only when we choose to.

Discussion Questions: Scarlett, my wonderful editor at CDH (see her photo with mine at the top of this essay: she’s the much younger and prettier girl!), predicted that this essay would draw a lot of attention and suggested that I tack on at the end of the essay some relevant questions for the CDH community in order to facilitate discussion.

These questions assume that you are a crossdresser, that you (at this time at least) don’t plan on transitioning, that you are not living fulltime as a woman.

When you dress as a woman, whether in reality or even just ”in your dreams,” is it more than “just dressing?” Is it just the clothes, or is it the desire to BE a woman in the world, however intermittently? 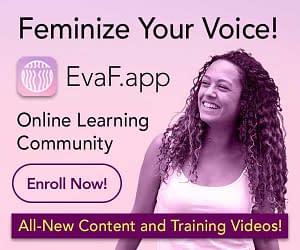 I have never met a crossdresser who doesn’t wish that she had more opportunity to crossdress, that she could do it more often, that she could be successful presenting herself as a woman in public: given that is true: what exactly is it, in your opinion, that distinguishes a crossdresser from a pre-op transsexual? (In your response, go beyond the prima facie “crossdressers don’t want to transition”: talk deeper about the psychological and emotional differences.)

When you get your total girl on as a crossdresser, do you feel like a girl or do you feel like you need the hormone treatments and sexual reassignment surgeries to have that total feeling as a girl?

Please feel free to send in a response to my article or an answer to one or more of the questions posed to you above.

What a beautifully expressed response! Labels in any way, shape or form do nothing but divide us as the luminous beings we truly are. It’s hard for me to wrap my head around someone in a ‘less accepted community‘ being so disdainful after all the internal and external struggles they must have experienced.

Thanks for your note, Rei.

Gladly, though, in recent years its more the exception than the rule. It used to be worse when transsexuals would put us in the same class as drag queens. Now, more are accepting that there are lots of points on the transgender spectrum, and each member is worthy of respect.

Thank you for coming to the defense of us part-time “gurls”. I won’t presume to speak for others, but as for myself: I don’t present as Bettylou full-time because I can’t…family obligations take priority over my personal desires. I’m not on HRT because my medical history rules it out. And I don’t even consider surgery because I’m in my eighth decade; it would be foolish and dangerous to pursue that thought. Nevertheless, I’m content; because in spirit, in my heart, I AM Bettylou, 24/7/365.

We’re in exactly the same place, Bettylou. And I stopped dressing at all just this year, but I’m in the process of writing a series for CDH on still participating as a “vicarious woman”.

Cassie, Thank you, thank you, thank you for writing such a thought provoking, well written essay. I found it so compelling, I read the essay along with many of the replies twice. What struck me initially was the sentence fragment that started the essay. I found it bothersome on two levels. The first and most important level to me is using the descriptor “just”. In my experience, describing oneself or others as “just” is a strong devaluation. The second way I found it bothersome, was that it was a sentence fragment excerpted from a full note. Initially I started to… Read more »

I’m writing this reply not so much to Bobbi herself but to everyone. If you have a few moments, do open up and read the whole of Bobbi’s response.

This is a deep thinker. And also, she is an introspective woman who is remarkably honest with herself. And open in her sharing.

In short, this is not just a reply to my essay, it is an important essay in its own right. And worth reading.

I’m a Late Bloomer, a MTF Crossdressing Closet Girl; When I’m Dressed and have my full Girl on the clothes, the heels are basically accessories to my feminine persona. The Dressing adds or even highlights the feminine movements and mannerisms which is a part of my self expression, my self identity. It does definitely surprise me to hear of this type of judgment or class casting in our little world. Considering wether one has fully transitioned or just starting out as closet dresser; the outing, the shaming, the rude and cruel responses to us who identify under the Trans Umbrella… Read more »

I think less than it did a few years ago (when transsexuals were first feeling a sudden explosion of acceptance and validation and, ironically, because disdainful of others on the spectrum), but it still lingers. Hence my essay.

Cassie, for me when I go out my goal is to be treated as a woman whether I am ‘passing’ or not. I think I often get close to ‘passing’. 4 months ago when I celebrated my 66th birthday by going to Ulta to have my hail colored I was glad to have my covid mask to hide behind to do it. As I was leaving the store and paying the bill the girl at the check out commented on how nice my hair looked I so much wanted to give all the people in the store a huge hug… Read more »

Yes, Sandy, be it a salesclerk or a handsome man, it’s all about validation. If you haven’t yet, you should read my essay on my first time being kissed by a man.

Well stated Cheryl. I have experienced this prejudice over the years from other transexuals looking down at us. I would get asked when you are going to start hrt. My response is that I am happy living both worlds.

Great article, and I agree. I have many post op transexual friends, and yes among them are the types you are referring to. But I find it funny, that many times that same person was a crossdresser for years, and then one day decided they were trans and that instantly made them better than us (and better than them the day before). Most post op girls are really sweethearts, but we all come in different flavors. We live in a climate where everyone is trying to divide us. Often times we don’t even know why we are upset with other… Read more »

clip on or pierced earrings

Do you plan on getting a tattoo