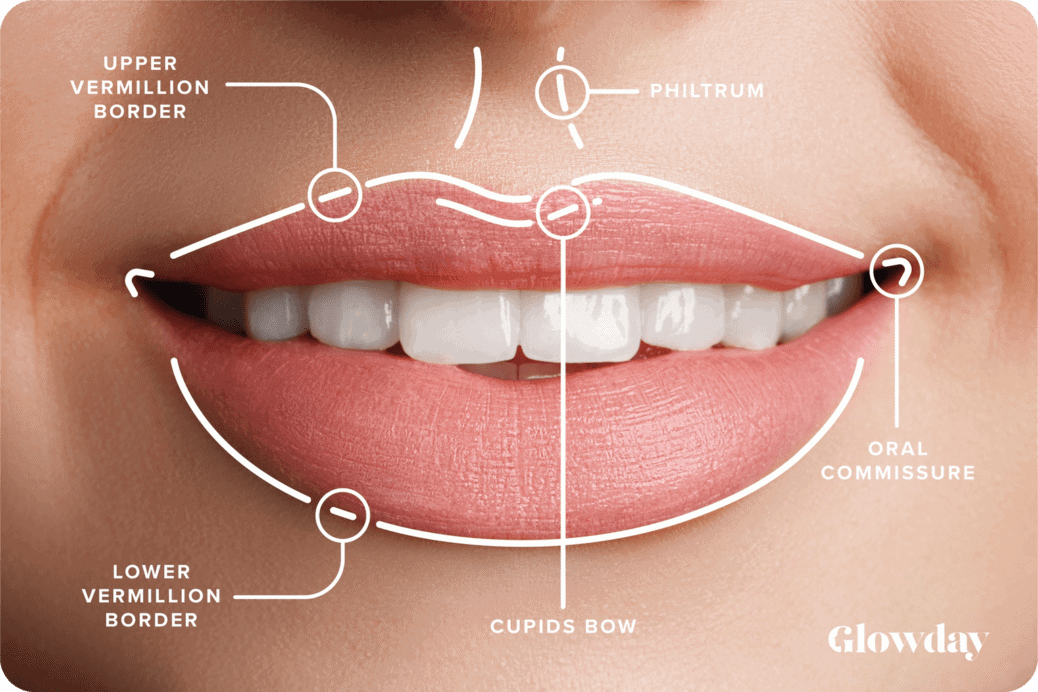 Hey girls, I thought this would be a simple way to both research and write an article on the female lips as they are such an important feature of our face. They are a good indicator of a person’s gender. But… I am now convinced that there’s nothing simple when it comes to explaining female body parts. Human lips are unique in both their construction and purpose, but those of a female are different. Female lips are lusher and fuller than male lips, which are typically thinner in width, shape, and in skin thickness. Female lips tend to be much closer to the nose than male lips.

Surface anatomy of the human lips

The skin of the lip, with three to five cellular layers, is very thin compared to typical face skin, which has up to 16 layers. With light skin color, the lip skin contains fewer melanocytes (melanin pigment, which gives skin its color). Because of this, the blood vessels appear through the skin of the lips, which leads to their notable red coloring. This also aids Doctors in diagnosing certain blood-related illnesses. With darker skin color, this effect is less prominent. The skin of the lips contains more melanin and thus is visually darker. The skin of the lip forms the border between the exterior skin of the face, and the interior mucous membrane of the inside of the mouth. The upper lip line is known as the cupid’s bow. The fleshy protuberance in the center of the upper lip is a tubercle known by various terms. The lip skin is not hairy and does not have sweat glands. Therefore, it does not have the usual protective layer of sweat and body oils to keep the skin smooth, inhibit pathogens, or regulate warmth. For these reasons, the lips dry out faster and become chapped more easily.  The lower lip is formed from the mandibular prominence, the upper lip covers the anterior surface of the body of the maxilla. Its upper half is of usual skin color and has a depression at its center, directly under the nasal septum, called the philtrum, which is Latin for “lower nose”, while its lower half is a markedly different, red-colored skin tone more similar to the color of the inside of the mouth, and the term vermillion refers to the colored portion of either the upper or lower lip.

The reasons we have lips

Because they have their own muscles and bordering muscles, the lips are easily movable. Lips are used for eating functions, like holding food or to get it in the mouth. In addition, lips close the mouth airtight shut, to hold food and drink inside, and to keep out unwanted objects. Through making a narrow funnel with the lips, the suction of the mouth is increased. This suction is essential for babies to breastfeed. Lips can also be used to, such as sucking on a straw to drink liquids.

The lips help in creating distinct sounds—mainly labial, bilabial, and labiodental consonant sounds as well as vowel rounding—and thus are an important part of the speech apparatus. The lips enable whistling and the performing of wind instruments such as the trumpet, clarinet, flute, and saxophone. People who have hearing loss may unconsciously or consciously lip read to understand speech without needing to perceive the actual sounds.

The lip has many nerve endings and reacts as part of the tactile (touch) senses. Lips are very sensitive to touch, warmth, and cold. It is therefore an important aid for exploring unknown objects for babies and toddlers.

The lips contribute substantially to facial expressions. The lips visibly express emotions such as a smile or frown, ironically by the curve of the lips forming an up-open or down-open parabola, respectively. Lips can be pouty when whining or perky when being provocative.

Because of their high number of nerve endings, the lips are an erogenous zone. They play a crucial role in kissing and intimacy.

A woman’s lips are also a visible expression of her fertility. Psychologists have concluded that a woman’s facial and sexual attractiveness is linked to her hormones during puberty and her development. Contrary to the effects of testosterone on a man’s facial structure, the effects of a woman’s oestrogen levels maintain a relatively “childlike” and youthful facial structure during puberty and during final maturation. The more oestrogen a woman has, the larger her eyes and the fuller her lips, characteristics which are perceived as more feminine. A woman’s lips are therefore sexually attractive to males because they serve as a biological indicator of a woman’s health and fertility. A woman’s lipstick (or collagen lip enhancement) attempts to take advantage of this by creating the illusion that a woman has more oestrogen than she actually has, and thus that she is more fertile and attractive.

Lip size has been linked to sexual attraction in both men and women. Women are attracted to men with masculine lips—more middle size and not too big or too small; they are to be rugged and sensual. The researchers found that a small nose, big eyes, and voluptuous lips are sexually attractive both in men and women. Also, the lips of females may temporarily swell during sexual arousal from the infusion of more blood.

Filling the lips so they appear fuller and more feminine can be accomplished in three ways. Through the use of popular injectable fillers, fat transfer injection using your own fatty tissue, which is the most natural and longer-lasting method, or through implants and /or tissue grafting.

There are several injectables that a doctor could use, but too many to expand on. Each has a slightly different purpose in accommodating a patient’s preference for fullness and shaping and lasts from 1 to 2 years. Fat grafting, as it’s called, also falls under the injectable type as it’s taken from the abdomen, sterilized, and injected into the lips. This procedure lasts anywhere from 3 to 6 years.

Implants are added into the lip cavity after a small incision is made at each end of the lip. These are permanent and the word is still out as to how they blend with age as the skin gets thinner.

Grafting is done by removing a piece of skin from the lower abdomen and inserting/suturing it in place. Also, a section of tissue can be removed from under the nasal opening in the shape of a half-moon and then sewn together, therefore lifting the upper lip and bringing it closer to the nose.

Permanent makeup is all the rave nowadays, and I have found no pros or cons to mention. In case you aren’t aware, it’s considered a tattoo. Once done, the area will scab up and if you itch the scab and it falls off, so does the color/ink. (Your call ladies)

Thanks Tianna for the most descriptive and informative article I’ve ever read concerning lips. The more we can understand about the female body the more we can imitate their beauty.

You’re so right Michelle. It is the reason I keep writing articles about the parts of our bodies that a female usually highlights. Thanks so much for the compliment. Huggz Tia

What is written in the article is partly right but it is not correct to define it as a standard of gender distinction. A lot, in my opinion, depends on the genetics inherited from one’s parents. Unfortunately, I know women who are used to highlighting their cupid’s bow in a disconcerting way to the point of making their lips look like swim tops or a bad imitation of a Drag Queen style makeup. When I make up my lips I don’t need to highlight the curve of my cupid’s bow as it has always had a more feminine than masculine… Read more »

Thanks so much for sharing, Greta. I completely agree with you i.e. (over-highlighting) … I write to educate for health, then for esthetics. But as you put it, making daily care a routine is the best way to look your best. Many underestimate our own bodies. Thanks for sharing, Greta Huggz Tia

Thanks Tianna for that wonderful article. Unfortunately I have thin lips, beady eyes, and a big nose which, given your article may explain a lot of things for me. 🙂 Question: does being on hormones now offer any hope for me in the lip department or has that ship sailed? Also, you noted the lips have three to five layers compared to sixteen layers for the face. I’d seen a documentary once that said a woman’s clitoris had 8,000 nerve endings compared to 4,000 in a man’s penis and I always wondered, who’s counting? If it were me I know… Read more »

LOL I cannot speak for the nerve-ending bit, but my lower lip has gotten plumper over 4 years on HRT. My upper is thin like yours but I have seen cupids bow of mine get a bit more pronounced. (The edge of it is sharper now, not plumper) Thankz for sharing sweetie. Huggz Tia