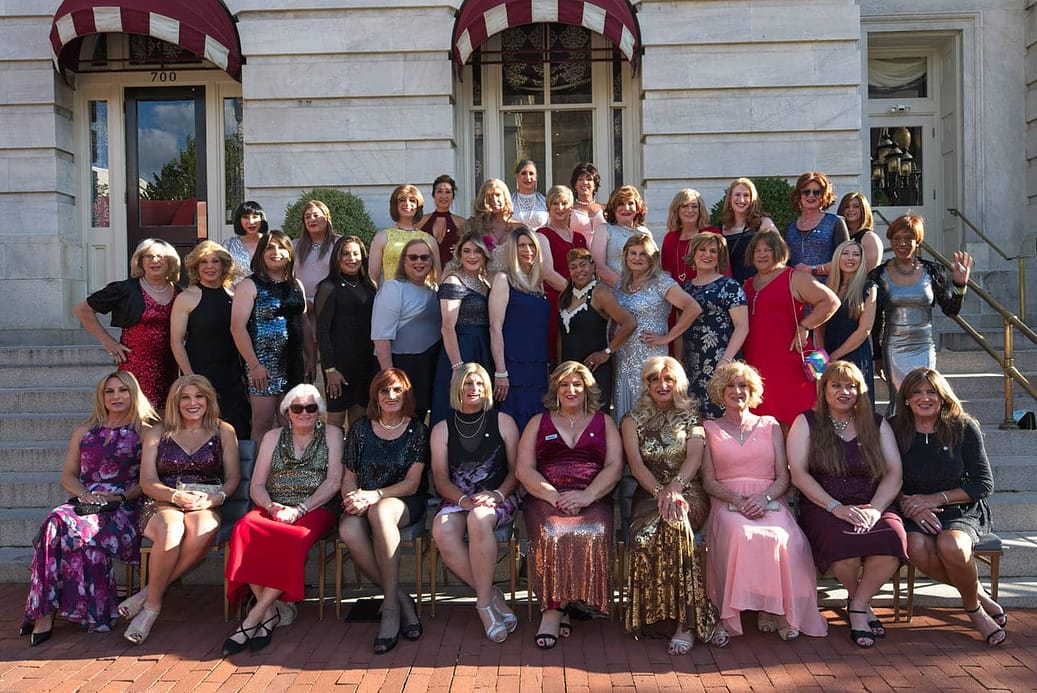 I was asked if I would do an article on the Vanity Club, a transgender group, one that I have belonged to for 25 years, and which just celebrated its 25th anniversary in DC. I’m going to share an edited version of a speech I was honored to give. It was at dinner, where I happened to be the oldest active member among the ladies in attendance.

In 1995, the internet was just at its beginning, and we just wanted to not be alone, wanted to be able to share who we were. From the many of the original group, there are just three of us left who are still active, but over the years we have had over 700 members come and go, and currently are 200 strong. We represent all parts of the spectrum, all parts of the world. We have cried when we lost friends and celebrated when we met new friends. Originally, it was pretty much an open invitation if someone knew you, but over the years it became a more structured service, not just a social group. As such, we have big sisters, little sisters, and someone who must sponsor you and the membership must vote after being vetted by the Membership committee. But this has been good because, for those that join, we have confidence that they truly want to be part of our community.

What is most important to me from being in VC? It is the friendships. My VC sister, Sheri, who I first met in 1995, is my dearest friend, and that is what I believe is most important: the friendship we all share. With friendships comes trust and respect for one another. We each had our journeys, and each one was unique. Since Sheri retired and moved to Florida, I have missed her deeply; we talked about everything and knew each other in our work lives. I was still active duty military, an officer, so it took a lot for me to be open with her about my personal life, and her in return. It made our friendship that much stronger.

How many of you remember GeoCities on the internet? Before VC came to be, I had a site on GeoCities,  called Linda’s Paradise. It was a place where I could share, not just about me, but information on the transgender community, whatever was in the news, on television, or in the movies. I had a friend’s page where if you had two hearts it meant we had actually met and one heart if a friend I knew had met you, but not me personally. So, it was a safety mechanism. So, does this sounds familiar? Something like Facebook? Yes, it is true; I do not have an ounce of innovation in me, because if I did, I would have seen the light! But my point is really the world continues to change, and some days it takes three steps forward, and some two steps back, so continue to be mindful of your environment and be safe.

At the VC anniversary event, they asked me when I originally joined VC what did I think the Club would look like in 2021? Well, back then I hoped it would continue to grow and we would have members from all over the country and the world. That much has come true. We didn’t have big sisters and little sisters; I think that is wonderful. But it is so much more. We have sisters who lead their private lives, and we have sisters who are very active and advocates for all those in the LGBTQ community. That part I think is awesome. So, whether being private or in the public mainstream, we all continue to represent VC with dignity, professionalism, and integrity. If you would like to know more visit the site Vanity Club Organization or reach out to me, love to chat.

*Brina’s note: (I felt that it would be worthwhile to share about another respectful group, as Marie previously commented about Tri-Ess. Our sisterhood on this site has continued to grow and has become a voice and a beacon to others. I want to personally thank Linda for sharing and for being a member here at CDH!)

View all articles by Linda Robinson
The following two tabs change content below.

I am retired military work, work for the government. Married genderfluid girl. Wife knows of Linda. Would say is accepting to a degree.

Sounds like a wonderful group. I wish I lived in your area.

Susan, the group just had it’s 25th anniversary in DC. We have members all over the country. In fact I have couple of sisters who live up in Wisconsin area. Hugs. Linda

Have known about VC for many many years. Remember when the internet was dial up and finding the VC members on Miss Vicky Rene’s Prettiest of the Pretty. I was stunned by the sisterhood and sharing of all the members at that time. SO proud of all of the members for keeping this sorority strong and thriving over the years.

I was so saddened when Vicky passed away. She was a good friend of mine.

Vicky was such a sweetheart! And the “Prettiest of the Pretty” site did a lot to encourage so many of us! I remember feeling so awesome when she asked me if I wanted to be featured in her site!! And so many others did too!!

Thank you for sharing, Linda. This sounds like a wonderful group! I know a lady here in California that was a member for a few years. I can totally relate to your feelings on the importance of friendships. I’ve made one really close friend here on CDH and that is what I was hoping for when I joined. There are so many lovely ladies in our community and having a way to share and connect is important.

I have recently met a friend that is in my area and we have a lot in common. Hope we continue to develop a friendship. Am happy you have that.

As a former member of the Vanity Club (VC 192) I can tell you it was “the club to join” and belonging to it was a privilege.
There were no membership fees, and like Linda indicated you could be as active as you wanted to be within the club.
I had the chance to meet many other VC members, because there was(is) always some presence in most conventions.
Geocities! That brings some memories back! Maybe somebody here visited my page? “Gaby’s World” in the Geocities/WestHollywood neighborhood?

Geocities is a blast from the past. I did not visit your site. Did you live in West Hollywood back then?

My “home away from home” was at Geocities/westHollywood/4835 – signed in in December ‘97!
Funny how learning html to build my page ended up being a desirable skill at work!
But no Marie, never lived in Cali. 😉

Anyone in San Antonio tx or nearby?

I love San Antonio. There will be a VC gathering there next September.

Awesome thank you for the reply

Thank you for sharing this. Its so encouraging to see such a large established group. We are all sisters in heart whether a member or not.

Just a note that as many of you know, there are other groups, and means to be connected, and Crossdresserheaven is one of those. The key is find one that works for you.

Though having identified as at least partly a girl since I was five or six years old and secretly wearing my mother’s skirts and dresses from 12 I never had contact with a transgender community or even knew such things existed until my 30s in the mid to late 1990s. I believe it took me another 10 to 15 years to realise transitioning was an actual possibility for “ordinary” people ike me, only wishing a normal quiet life as a woman. I visited some web sites, most of them long gone by now. In the summer of 2012 l self… Read more »

What a gorgeous group of beautiful women! x

Wow. What a lovely group. I love this article it was very informative and to be honest I think I was locked in the closet too long. I had no idea about The Vanity Club. Hearing about you all gives me hope and encouragement. Hopefully one day I can be in a similar group and in such a lovely group pic.