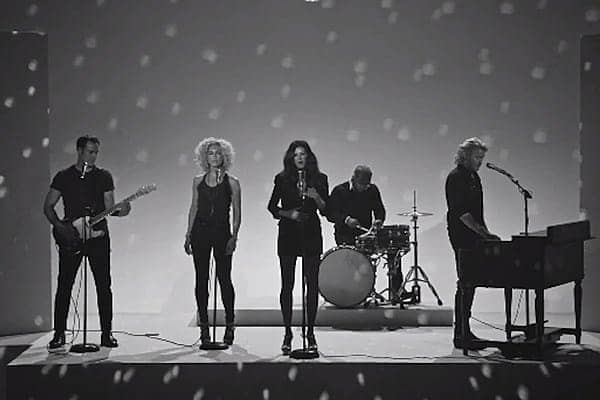 I have been a fan of Little Big Town for a long time. I describe this band to my friends, who don’t listen to country music, as sounding like “ABBA with twang.” In 2015, they released a very popular and controversial song. Girl Crush is a song about woman who is jealous of another woman. She wishes that she can look like her and maybe she would have a chance at the guy that the other woman is dating.

Why was this song controversial? Some people thought it was about a woman being infatuated with another woman.  They discovered it was a manufactured controversy.  Most people knew what the song was about, despite the provocative song title.  Karen Fairchild, who sang lead on this song, responded to the controversy, “That’s just shocking to me, the close-mindedness of that, when that’s just not what the song was about.  But what if it were? It’s just a greater issue of listening to a song for what it is.”

Little Big Town is a country music group which has a four-member gender ratio like the classic 70’s pop group ABBA.  The band consists of Karen Fairchild, Kimberly Schlapman, Phillip Sweet, and Jimi Westbrook.  I became a fan of them when I heard “Good as Gone.” That song is a rollicking kiss-off of a break up song.  Girl Crush was really different for them.  It has a classic 60’s pop feel to it.  It made sense to have the music video filmed in black and white.  This song really hits home with me.  I can’t tell how often I see an attractive woman.  My heart yearns to know her better.  Yet, another part of me feels guilty, because I am so jealous of how she looks.

So, this song is not about being a lesbian or being transgender, but…I can’t help but listen to this song and be reminded of how I look at another woman and wished I had what she had. Wishing that I had her hair, lips, breasts, hips… Feeling ugly comparing yourself to another woman is not something that only happens to transgender women. It’s universal with all women. Feeling confident in your looks is always a constant struggle. We all have things about ourselves that we feel insecure about. Our insecurities are related to being born in a body that doesn’t reflect who we are. So, being around other women, especially really beautiful women can cause dysphoria.

What can we do? As someone who was born with a facial birth defect, there are no easy answers. It is simply perseverance. Focus more on being a good person. Rather than, being a good-looking person. Of course, we all want to look beautiful. The secret ingredient of being beautiful isn’t anything on the outside. It’s confidence. Accepting yourself as who you are is something that sounds easy. It’s not. Some people can go through their whole lives without being able to do that. The way to do it is to forgive yourself, love yourself, take care of yourself, and have faith that other people will see the beautiful woman that you are.

Jaime, another awesome article! Thank your for introducing me to a band that I have not hear of and their music. The song most definitely made me reflect on the nature of jealously and totally agree that confidence is key.

Jaime, enjoyed your article, and your perspective! Jo-ann

Hi Jaime, A lovely article, I love LBT and that song, your description of them being like ABBA with twang is awesome! I (in my past) was shy and self concious about my average appearance and was never a ladies man… but have found that since meeting and accepting Olivia as being part of the whole me, my self esteem and confidence has risen considerably. My looks haven’t really improved with age but how I percieve myself sure has. You’re right in that it appears to be a sizeable key to acceptance and desirability, I now recieve much more hmmm… Read more »

Great article Jaime-always loved that song and your description of it is deadon. It’s a ballad type song and I think lends itself to many different interpretations as do other songs I’ve written about for media review. While the writer may have consciously been writing it from one perspective, like any piece of good writing it can be seen through the filters of our own emotions and thoughts and experiences. Thank you for sharing your insights.
Cyn

Jaimie… Just moved to the Puget Sound area of WASHINGTON in 2017, from NASHVILLE, TN. TRUST me…I know Little Big Town. Arriving in NASHVILLE in the mid ’90’s and watching the town and surrounding neighborhoods growing up, I was a surgeon at VANDERBILT University, VA Hospital from 2009 to 2017. I drove by Gibson guitar factory every day. I have been a percussionist since the mid 1950’s. My home in Hendersonville, TN ,was within Walking distance to the homes of Johnny Cash, Roy Orbison and Conway Twitty. Moved to COOLER temperatures in WASHINGTON State. LOVED Little Big Town and watched… Read more »

Here is a little piece of trivia that I left out of the article. I had a brush with Little Big Town. The album cover for Tornado is the motel I worked at the time when they did that photo shoot. I really wanted to meet them. Unfortunately, I was working graveyard shifts. The photo shoot of the band was during the day, and I missed them.

Jaime… Thanks for a great article. I am girl crushing on both Karen Fairchild and Kimberly Schlapman. I’d love to look like them! I only hope that someday I’ll have half the confidence that you have.
Luv, Cindy