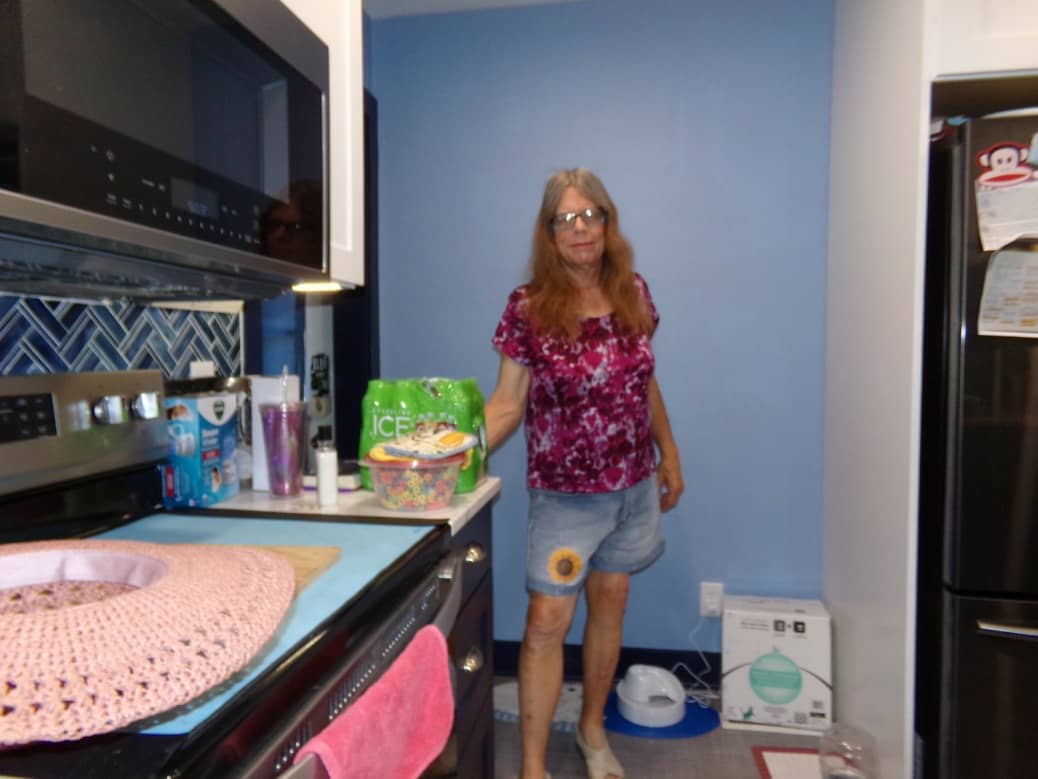 Hi All you wonderful girls.  What a night!!!!

I got to the reunion site about an hour and half early.  I lost my invitation and didn’t want to be late.  Needless to say I was the first one there.  It was about 40 minutes before the next couple showed up.  The venue was only partially set up so while waiting I read a book of the obituaries of the 12 classmate that had passed.  The end of the book had some of our favorite teachers who had also passed on.  This was so sad I nearly broke down crying, but I didn’t want to ruin my makeup.

The next ones to show up were Dave and his wife.  Neither of us could recognize the other (gosh he looked so old).  When I told him who I was he hesitated for a second then we talk like old classmates, no big deal.

When others started to show up it was hard to identify some of them;  some had changed so much after 50 years.  There were about 3 of the girls who, when they came in looked at me for a few seconds, then smiled and exclaimed loudly ‘CASSIE’!  These were some of the girls who had worked on our class directory where I had outed myself already.  Soon we got our name tags, so the guessing was reduced.  There were a few that were confused at first because we also have one classmate named Cassie.

Most of the girls were at least somewhat accepting.  Many of the guys were easy to talk to and told me it was good to have me at the reunion.  NO ONE made a negative comment all night.  There were, however, a handful of people who I didn’t get a chance to talk to.  One was a big dude who was a state wrestler; the few times he looked my direction he turned and went the other way.  Probably just as well I never got to have the talk with him; that is the ONE I think would not have gone well.

Most of the girls seemed accepting of me and we had a couple of great ‘girl time’ visits.  Being called Cassie all night was heavenly!!  Yes, a couple of people slipped up calling me by my male name, but most of them corrected themselves said ‘sorry Cassie’.

After the reunion itself I was invited to one classmate’s motel room for an after reunion party.  There was myself, 4 of the girls, and one spouse.  We spent about 2 hours just talking about old school days and classmates that weren’t at the reunion.   It was so great to meet old friends and be treated like one of the girls.

I WAS SOOOO HAPPY!

All this is like a dream come true.  This is just another adventure that came into my head after reading all you wonderful girls’ stories.

Has anyone else here had an idea to do something after reading someone’s story?

Did you act on that idea?

How did that turn out?

View all articles by Cassie Jayson

Sounds like a perfect night Cassie! I am so glad for you that it turned out so well.

Thanks the whole weekend was a wonderful dream.
Cassie

What a wonderful night for you Cassie I am so happy that it all worked out.

In some respects you were the one that changed the most! It sounded like a great success and I hope that you have rekindled old friendships and maybe will see them again as Cassie.

I am sorry to say that most of my high school friends quit going to reunions 10 to 30 years ago. It looks like I have some new friends who I hope will be more long lasting friends to talk a lot of girl stuff with.
Cassie

Wow! What a great story, Cassie. So glad you had a wonderfultime and were so accepted. Maybe times are changing after all.

Wow, Cassie. That is great! That’s something about which I’ve fantasized so much– attending a reunion as myself & not as him. Glad it went so well for you. You’ve transitioned, right? I find that people are much more accepting if we tell them that we’ve transitioned than if we say we’re crossdressers.

Thanks Dawn, It was a dreamy weekend. No I have not transitioned, I told them I am gender questioning (I am not sure where my head is on all this and how far I want to go). I know I t least somewhat pass. When we had our nametags on, because we have a couple of classmate with the first name Cassie, they thought I was her at first, so I had to explain myself to them. Even that went well.
Cassie

My 50th is on this Saturday August 6th 2022! This reunion is very unique in the fact it covers the 1972 graduates up through the 1979 graduates! The one unique thing that has a pile more attendees coming is this year is the very first year those of us who grew up in this small town area but had to move away before we had the opportunity to stay a few more years to graduate from this particular high school as a result of ours father’s work transfer have finally been invited to the party for the very first time!… Read more »

I see you’ve been lucky enough to get together on such a regular basis with your gal pals!

You’re one lucky and blessed girl!

Hope you have the most wonderful time with your old classmates. Being in a small school makes things so much different (my class was 88 persons). Makes it easier to talk with the jocks and cheerleaders; that is a huge step for a crossdressing shy nerd.
. Cassie

Your post really resonated with me for a number of reasons. My birthday is August 6(same day as your reunion). I am going to a 50th reunion in September (but in drab – would not have nerve to present en femme). and like a number of your classmates, my dad moved us for work reasons so I wound up attending 2 different high schools and getting to go to 2 different reunions as well.

Hi Alice and thanks so much for your note! And yes, this high school reunion of mine is from the high school I would have graduated from had my dad stayed put in Midfield, Alabama! This reunion covers everyone who would have graduated from 1972 to 1979 so I’m expecting a huge crowd to be there. My year would have been 1973. I ended up going to Laporte High in Laporte Indiana for one year and was on the wrestling team and then less than a year later we are on our way to Altamonte Springs Florida where I graduated… Read more »

Scarlett, That is an utterly amazing story – 3 times in 4 years. You are amazingly flexible. I thought 1 move was more than enough. My dad was a general practice doctor who was moving on to psychiatry and thus was doing a residency and wanted to be near where he was doing it. That is why he did that. I was very upset as I had to leave all my friends behind. But I was lucky. The high school I went to was large, but it was starting an experimental program – a school within a school it was… Read more »

Thanks for your reply Alice and so happy everything turned out just super for you girlfriend!

Such a heartwarming story Cassie. I attended my 50th (one year late due to Covid) last year. This was the second major public event for Beth, the first was as a DJ at a wedding. This was going to be even more scary because they were all classmates that knew me way back when. It was wonderful! The women all accepted me openly and only two men were negative. The one I expected to have problems with just ignored me all night which was fine. The orher one made a vulgar negative comment, which I didn’t hear as it was… Read more »

Beth’ it was one of the most amazing nights ever. Then after the reunion itself to be invited to have a visit with some of the women and treated as just one on=f the girls. For me just being a HS nerd invited to hang with the girls who were cheerleaders was so special.
As I keep saying I only got up the nerve to do this night after reading all the wonderful stories here at CDH.

Love all you girls here. CASSIE

Gee thanks Cassie, now I am all teared up reading that. It’s okay I don’t mind, I’m sensitive. I am happy for you that it went well.

Thanks, Stevie. The night was just so wonderful, about all I could wish is that we could have gone on for 1 or 2 more hours. The actual reunion wrapped up about 9 pm and the after ‘party’? about 11:30. If we would have been 30 years younger I am sure we would have gone about 2 hours longer.

Cassie, so very happy for you!!!

You have the house to yourself all day and have put on your favorite dress and heels and have done your makeup to perfection. You hear a knock at the door. What goes through your mind?