My First Outing as Ellie 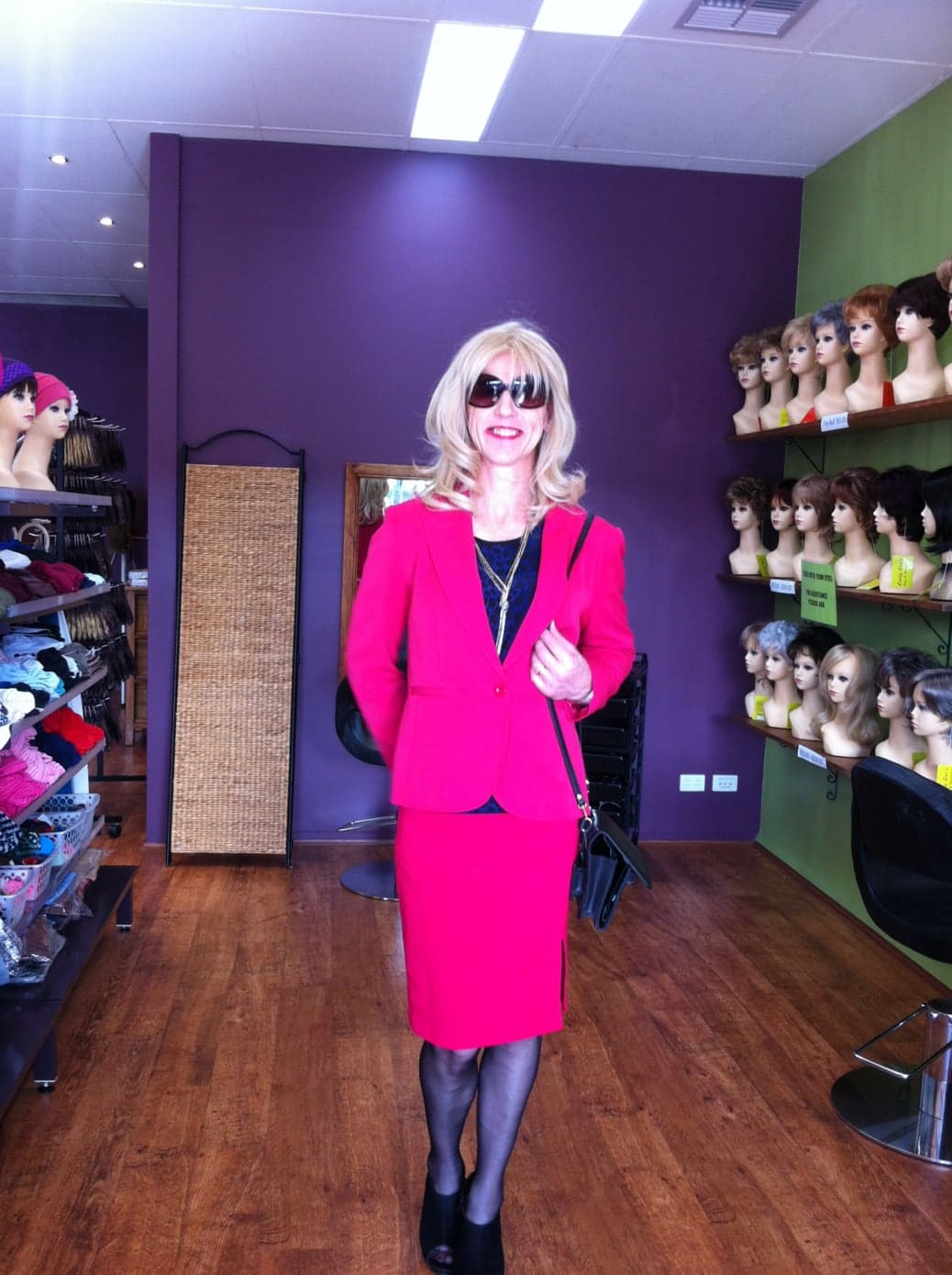 What seems like a long time ago, I got my first real wig. It was in a shop called Curly Sue’s in Morley, Western Australia.

The owner (Sue) was very understanding, and we discussed a lot about my aspirations as a CD and where I wanted to go with it. It was all so new to me as up to that point it was about quickly wearing a skirt when no one was in the house, etc. You all know the score…

I had recently joined a crossdressing forum, so I thought it would be a great idea to get all dressed up in my new hot pink suit and sunglasses and head off to Curly Sue’s to get her opinion on what she thought of me. I’d document it all on the forum; sounded like a plan…

I was really new to makeup and walking in high heels but had a day off work. I thought, what the hell! In the words of Shania Twain, “Man, I feel like a woman. So, let’s go girls…”

Monday the 29 of July 2013, I got in my car, and OHHH… the wonderful feeling of being out in the real world dressed in a woman’s suit, black stockings, and heels. It was so exhilarating.

Twenty minutes later, I arrived at Curly Sue’s, my heart racing like a trip hammer. I have never given up on anything that I have set my mind to. After documenting the drive on the forum, I stepped out to feel the real living earth under my feet. There was a slight breeze in the air, which ruffled my hair. I couldn’t breathe for about 30 seconds as the enormity of what was happening cascaded through me.

I opened the door to Curly Sue’s and there were about 4 or 5 other people in the store. Eventually, Sue came over and asked if I needed anything. I couldn’t speak, and she asked me if I was ok. No, I wasn’t OK. I was almost hyperventilating. I managed to say quietly, “Hi Sue, do you recognise me?” She looked at me quizzically and shook her head. When she looked at my wig, it triggered her memory. From then on, everything became a blur. Talk about VIP treatment. She gave me the lot… I love that woman…

She asked if I had a phone. She wanted to take my picture. (It is uploaded to the public photos,) and I was blown away by how I looked. The suit was definitely Hi Vis, but I’ve still got it now and I really like it.

She said why don’t I go shopping at Morley Shopping Centre, directly across the street from her store. I thought that was a bit too big a step, so she mentioned I could just go for a walk down the street and she’d look to see if anyone was watching me. I went about 100 meters down the street and back, passing quite a few people. No one seemed to take any notice and Sue said I would be fine, and to check in with her after I had been shopping.

My emotions were going crazy at this point. I got in my car and updated the forum with the latest updates and drove over to the shopping centre. This was in a different league altogether. Hundreds of people. Don’t these people have work to go to?

It was mid-week, and the shops were crowded. Although, in my mental state, it might have only been 5 or 6 people… But a HUGE crowd, and having everyone looking at me and laughing, pointing at the silly man in a skirt and high heels who dared to enter their sanctuary–only they weren’t… No one paid any attention. As I walked through to Target, the guard at the door said good morning, Miss… I looked around until I realised he was talking to ME!!!! I croaked good morning.

This all sounds a bit light-hearted but let me tell you, it was both the scariest and most enjoyable thing I have ever done in my life. It wasn’t light-hearted at the time, but now when I look back on it, I can see it differently, and some of those moments give me pleasure.

After Target, I needed a cup of coffee, and this time the coffee shop was full. I walked up to the counter and, without disguising my voice, quietly asked, “Can I have a long black coffee, please?” The lady smiled and gave me a number and said to take a seat. Where??? The place was packed, so I squeezed in between two old ladies, still with my sunglasses on. They started steaming up and I couldn’t update the forum because I couldn’t see the screen. I quickly took off my Sunnies, wiped them, and put them back on as my coffee arrived.

Drinking made them steam up again. Not good. I took them off and noticed this girl looking at me weirdly…. I thought, OH No; she has clocked me. She kept looking over, not smiling or anything, just giving me the stare….

I had my coffee; updated the forum with the latest antics and explained how scary and fun it was at the same time and decided that unless I wanted to visit a cardiologist in the near future, I had better set off for home. The girl watched me every step of the way out of the shop… That was creepy….

Walking out of the entrance there were three 20-year-old guys blocking it. They were there to beat me up. They were talking and pointing and giggling. But again, no, they weren’t. Luckily, I didn’t have a low-cut blouse on. I was sure one of them tried to steal a glimpse. He would have gotten a shock if he managed to catch a glimpse of two big lumps of silicon in a lacy padded bra…

So that was it. I went back to Curly Sue’s and gave her a big hug and set off home.

When I got home, I logged onto the forum to update the very last part of my very scary/exceedingly good fun day out. Blog only to find the Mods had relegated it to a shopping thread. It was mixed in with all the “What size is 36C and how do I fasten a bra?”

I couldn’t believe it. I had spent hours documenting the most exhilarating day of my life on a forum for others to see in real-time and it got bumped to the lowest threads of the lot, where no one reads….

I was so disappointed. After all the enjoyment of the day, the thing that I really remember was the disappointment that no one really read it, as the time difference meant that only about ten people saw it in real-time before they moved it.

I still have fond memories of that day. Even after many more outings, some say the first time is the best, and I think that saying holds some truth here.

What a great experience and Sue was your fairy godmother to wave the wand to give you the confidence to get out there. What happened? Nothing except you learned that even with an almost high vis outfit no one noticed and maybe the sunglasses will come of in shops. It’s onwards and outwards now. Thank you for a lovely tale.

Great story, Ellie! And in 2013? Wow! I wasn’t even crossdressing, fully, back then and doubt I would have had the courage to do what you did. Even in the 9 or 10 shorts years since then, things have changed for all of us, making it easier, thanks to girls like you.

Great story Ellie & you look fab in the pink suit. I try think one of the biggest revelations when you first start in public life is that as long as you dress appropriately and have confidence nobody pays attention to you, unless it’s a compliment. I remember a sweet girl at a coffee shop complimenting my eye lashes once. I was so concerned she was going to say something else as my make up skills then were not very good. Also ditching the dark colours hoping no one will see you. Colour is just more feminine and can highlight… Read more »

Hi Ellie,
What a terrific story.
I had a similar story my fist time Out ,but I must say I didn’t look as good as you.
You looked fantastic as usual.
Thank you so much for taking time to share such a wonderful exciting experience.
Im so sorry the other forum didn’t post your story with as much care as you took to write it.
you deserved better.
Huggs Patty

Great story and experience Ellie! I know exactly what you are talking about with the scary happy moments of being out in the world! Those have been the best highlights of being out of the house and enjoying every day life like you want to! Thank you for sharing your story and happiness! It helps us all. Take care.

Started as a Sexual thing. Now committed Crossdresser every day. luckily Daughter knows and is supportive. Getting up courage to go for my paper in short skirt and hold ups. Best feeling when I am femme

Looking fabulous Ellie and thanks for sharing. I know how exciting it is to be the scariest and most thrilling experience at first and it just never leaves now. That was long ago for me but we all remember our first outings and soon it will become just natural .

Ellie, thanks for sharing….and you look so good in the pink suit! You are an inspiration…hugs Christine

I’ve just had a great time with you and others in the chatroom and here I see your article. First, you are a wonderful lady. Lots of fun. I want to have all the fun of following you and your antics.

One of these days!