Heal (Heel) Your Aching Back! 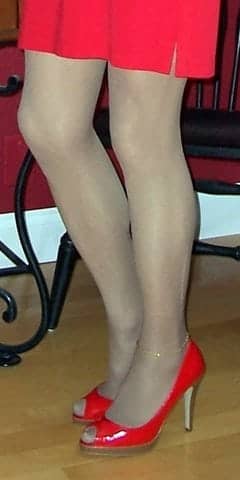 Those who have read my blog or seen comments from me about high-heels know that I am a strong proponent and advocate for wearing high heels. Because of this propensity, I have written, researched, and quoted others (some scholarly) who share a perception that, while high-heels are often uncomfortable and painful for some, they cannot be blamed for the multitude of ailments for which they have been identified. In other words, if you wear high-heels and do not feel they are negatively impacting your health, agility, or flexibility, they are probably fine to wear. Maybe you were born to wear them just as others were not. I think I was born to wear them – even if I was born a male.

The other morning, I had to leave home early for a weekly meeting. When I do this I do not have time to walk first. That morning, I had an hour or more available after the meeting, so I headed to the health club to fit in a run on the indoor track. I hadn’t run for several months, but with the walking, my relatively lean diet, and generally good health, I wasn’t concerned. I felt great and my time was better than it’s been in the last couple of years. I was thrilled. My lower-back felt a little sore as it often does when I return from a break in my running routine. So, I got in the hot tub for five minutes before my shower.

After I finished my shower and began to dress, I felt my back becoming more stiff. By the time I got to my car, my back was in full spasm. I had a few errands to run before returning home. It was about 9:30 AM and I had a funeral to attend at 2:00 PM. I thought if I could get home in time to take some ibuprofen and relax a bit. By 12:30, I was still pretty stiff. Rather than disappoint my wife with a cancellation, I summoned my strength and determination, got dressed for the funeral, drove to the church, and called my wife to let her know where I was sitting.

We got through the funeral, but after learning of my discomfort, my wife thought we should cancel our evening plans and just have a quite dinner. I found a comfortable position for most of the night and slept relatively well. In the morning, the pain and stiffness wasn’t completely gone. I moved around gently and tried to loosen up. While doing this, I thought it might actually cause some relief if I put on some pumps. Peculiar as it may seem to some, the elevation of my heel did seem to reduce the pain and stiffness in my lower back.

Out of curiosity, I searched the internet to see if anyone had ever expressed the concept of high-heels for back pain relief. Not so surprisingly, they had. Here are two quotes from an article by a noted physician at the Dallas Center for Spine Care.

• “The theory behind high heels causing back pain relies on the thought that wearing them causes strain in the thighs and hip flexors which forces an increased curve in the spine, and this increased curvature of the spine causes back pain. Having never worn high heels, I cannot say whether or not this is true; but, from what I’ve read and experienced with my patients, I’m not so certain that this is correct. As a matter of fact, I’ve had several patients with back pain and pinched nerves tell me that specifically wearing high heels has helped relieve their pain significantly.”

• “This pain in the back may also result from foot or leg fatigue that results from wearing these shoes and this can affect whole body mechanics. On the other hand, I’ve had more than a handful of patients with pinched nerves tell me that they feel much better while wearing high heels and I presume this is likely due to an indirect spinal decompression from the altered posture created by the shoes.”

So, who knew? I am not trying to beg the question, but my back is feeling much better. Maybe the whole crossdressing thing is good for us? It just might be that all the accoutrements that women have had in their repertoire for years are not merely stylish, feminine, and ingenious in design, but major contributors to women’s health. Perhaps we men should take heed. Crossdressing might catch on as the latest health craze…

View all articles by Falecia McGuire
The following two tabs change content below.

While I am a septuagenarian, I have tried to stay fit and trim with regular exercise and moderate eating. I haven’t done much full dressing for a few years because of the need to maintain facial hair and insufficient opportunities. If my wife was more comfortable with my androgyny, I would likely dress that way most of the time.

I couldn’t agree more! I was diagnosed with a back issue a decade ago or so. I will spare the details, suffice to say that I have something which can cripple me for up to 3 days in agony without warning at any time, but a sensible approach to diet and exercise keeps it at bay most of the time. That and what I thought up until now was my own discovery or imagination; When I wear 3″ silletto heels, my back and legs are in the most comfortable, slightly stretched position, which effectively counters an entire day spent at… Read more »

Great article! I’ve had some lower back pain lately, too. Last night, I recall while changing position in bed, I felt a slight popping sensation. That seemed to relieve most of it. I hadn’t tried the thing with the heels, but I love wearing them. Might have to start wearing them more (any excuse, right?). I’ve been told (as Rod Stewart says) that I wear them well. I’ve even been complimented by GGs that I handle them as well as any real woman. So why not do it more? Like you, Falecia, I have a wife who’s not 100% “with… Read more »

As a, now retired, foot and ankle surgeon, OVER the past 50years ,I have seen hundreds of thousands of foot pathologies. I have seen every style of footwear, heels of all shapes and sizes. I never told anyone what shoes to wear, unless the foot gear was Causing the problem they presented complaining about. Some footwear Had to be WORN for occupations. My wife and I used to give a medical conference talk entitled ” The Sex life of the Foot & the Shoe”. The audience loved it! We discussed sexy footwear, and hosiery. We pointed out what made each… Read more »

Thank you for your perspective. I probably agree with you. I presented an argument for the benefits of high heels because I genuinely believe they help me, they have been castigated by the masses, and they are a staple component of the human condition. High heels are fun. If they don’t work for you, don’t wear them. But if others find them compelling, let us have our indulgence. Do you actually have a whole poem about footwear?

That was the “whole ” poem!!.
Many people blame shoes for ” Causing ” their Hereditary foot problems on a certain shoe. I always tell them they are indicting the wrong article of clothing…it’s Not the Shoe…it’s THE GENES ( not to be confused with JEANS!!).
DR.T.J.

I can certainly vouch for the fact that heels/wedges have helped me in some of my aches and pains.

“…FEET, FEET, FEET…HOW MANY FEET WE MEET…!” From Dr. SEUSS, ” THE FOOT BOOK “.
THEY ARE A COMPLICATED PIECE OF PROPULSIVE EQUIPMENT. I always told my patients, I was the Triple A of Feet, cause you only call me when you get a FLAT!!
The Smile and the Foot MAKE MAN. ..MAN in the animal kingdom.
Dr.T.J

I went through my teens and 20s with very weak ankles! Sometimes on crutches when I twisted them. When I started to wear heels, I haven’t twisted or sprained my ankles once. They are a great therapy!
Thanks
Satin

I also agree. I’ve had back issues my whole life, as a child was told I had scoliosis and doctors wavered on whether I should be in a back brace or not. Now, around the house I put on heels (particular favorite is 4″ block heeled boots), stand straight up and relax my body, I can feel my back muscles stretching out, the pain goes away and over time my back has strengthened. No more pain and I’ve become more flexible. Mine might be an isolated case, but it works for me! Oh, and the heels and walking in them… Read more »