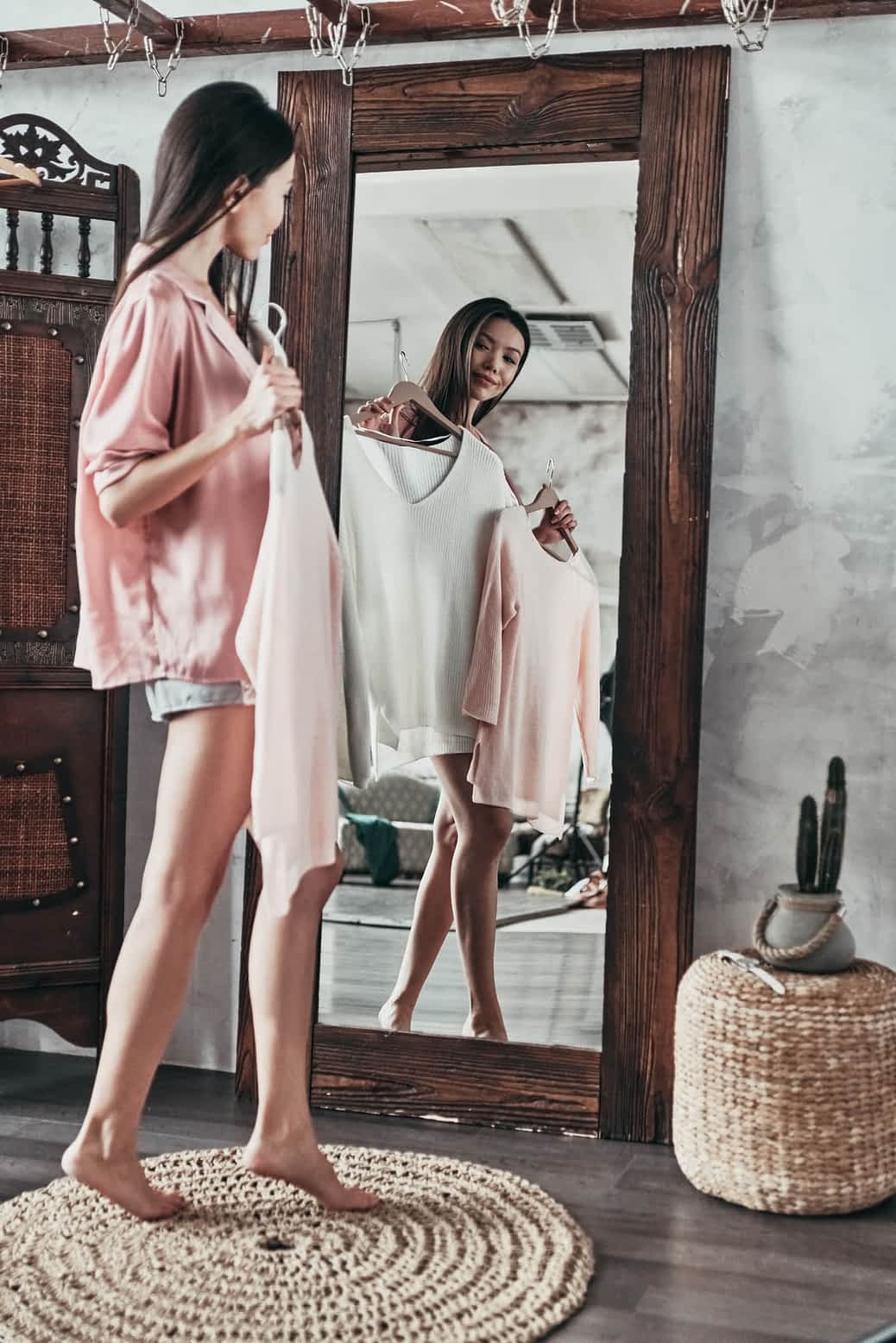 Like most boys, I started cross-dressing by wearing my mom’s panties and nylon stockings. Doing so was both erotic and enjoyable, but being a pre-puberty 8 year old child, I was not sure of the reasons why.  Eventually, with puberty, came the desire to wear my quintessential items of womanhood: bras and lipstick!  Although strongly drawn to these two items, I was overtaken by fear.  Fear that I may reach a point of no return and become a sissy (i.e. a boy dressing in girl’s clothes without any sexual reference applied). It was an embarrassment, what would my family and friends now think of me?  Thus, my “secret” was born and it would be kept for another 6 years, during which, I resolutely expanded into mom’s remaining trappings: dresses, skirts, blouses, heels, jewelry, additional lingerie and makeup.  I still felt guilty about my “secret” (and the arousal it caused) but I enjoyed even more my womanly transformation and seeing her reflection in the mirror. However, an unexpected day of reckoning was fast approaching.

I was 15 years old when one afternoon my dad left to watch a bowling tournament my mom was participating in. Great! Several hours alone, more than enough time to watch television and relax while dressed as a woman. However, I forgot to lock the door and as I headed to the bathroom to put on my makeup, my dad unexpectedly returned home for a forgotten item. He was gone long enough for me to put on my mom’s bra, panties, garter belt, nylons and heels. When he came in his draw dropped. I ran to the bathroom in my heels and locked its door.  I was caught!  Eventually, my dad came to the door and asked me to come out. I said “no, you saw me, I can’t come out!” About 15 minutes later I came out with only a towel on. We talked, and he said “I’ll need to tell your mom about this when she comes home”. I pleaded with him not to, but to no avail. I was told to get dressed and go with him to see my mom’s tournament.  No more being left alone to cross-dress.  After what seemed to be forever, we arrived home.  When dad told mom, the s—t hit the fan as she told me to never get into her things again or else…!  Next day we talked about it and she asked if I liked dressing up? I said “no, and I wouldn’t do it again”.  Sadly, I wish I could have said “yes” and maybe been able to dress up after school and be my parent’s pretend daughter helping with meals, washing dishes and cleaning the house.

After several months, I began to again dress secretly in mom’s things. I’m sure she noticed that her bureau draws and closet items were not quite as she left them, but she never mentioned it.  I would continue to dream of being a sometimes female for another ten years.  Then following graduate school, I got my own place and with my initial paycheck, I splurged and purchased the latest female fashions thereby creating my own hoard of feminine garments, heels, makeup, and a first wig.  It was thrilling and surreal; I could dress as a woman on demand!  Something I had dreamed about since childhood.  Thus, after work, I dressed up and became the lady of the house.  On occasion, I would wait for dark to journey out for either a walk or a drive.  These nightly excursions were both terrifying and exhilarating as I sometimes got cat calls or whistles, but that’s another story!

Thanks for taking the time to read my article. Now please take a little extra time to either leave a response to my article or provide an answer to one or more questions I’ve posed to you below:

Thanks so very much girls and I look so forward to reading your responses!

View all articles by Marian Andersen
The following two tabs change content below.

I am a mature, senior heterosexual crossdresser who would likely be en femme as often as possible if not committed to a family life and various male activities that I still enjoy. After my wife passed away (she was occasionally semi-supportive), my crossdressing gradually blossomed, such that, the walk-in closet; the bedroom dresser, and the mirrored wall cabinets are well supplied with female clothes, jewelry, makeup, toiletries and other necessities. Where I once viewed crossdressing as a curse (arousal, relief, shame, purge cycles), I now see it as a blessing because I can experience and enjoy a feminine side to my life (wearing soft silky clothes and undergarments, walking in heels with nylons, wearing jewelry and makeup, permitted to be emotional). I can marvel at how female mannerism and nuances freely spring forth from me while dressed as my alter ego. The rush I receive when I catch a glimpse of my female form when walking by a mirror. The fulfillment gained from the realization that I can comfortably live dressed as a woman without being self-conscious, especially during mundane days, that I am actually cross dressed. Both mentally and spiritually I have reconciled "her" as an important part of my fabric who needs to be expressed to keep my life in balance. I am a much better person to others due to this balance. Although I venture outside occasionally, I still need to gain more confidence in this area due to my stature (6 feet tall , broad shoulders. thick hairy limbs and overweight). But in my home, I'm the lady of the house and I enjoy that environment! As stated above, I am heterosexual but would love to communicate with any CDH sisters. Thank you for reading my bio, so can we have a chat now?. -Marian ox

Tags: crossdressing experience getting caught by one of your parents non acceptance from one's immediate family

I dont recal i was two young, but my sister would make me dress as Laura Ingalls and run in the tall grass and fall just like the tv show. If I wanted to play with them this was what she said she made me do. Well I never went in moms things maybe looked at them but that was a line I couldn’t cross… Now my sisters on the other hand she had her swim suits in the hall closet. I would take them but not put them back.. Nasty imo if I did. i would then put them under… Read more »

Thank you for your reply and interesting story! Seems you have had some pretty accepting people in your life, which is always helpful. -Hugs, Marian

hey marian. just wanted to answer one of your questions from a post i read from you. it did and still gets me very aroused to wear lingerie and my wife loves watching me. just to let you know i’m still kina of new to all of this. but its so fun.

Thanks for your reply Mike. Happy to see your wife enjoys participating; you are very fortunate! Also, you will realize that her awareness will greatly reduce the feeling of shame and deceit that often accompanies cross dressing. Keep the communication open with her and most importantly, keep any boundaries she may require as this will keep your mind at peace. Balance of crossdressing with your regular life is the key to maintaining this peace of mind (and marriage) throughout your life! -Hugs, Marian

I am a newbi as well and still get aroused while in lingerie, wife likes to see me subtley excited and it so fun