I’m a Boy and Boys Don’t Wear Those 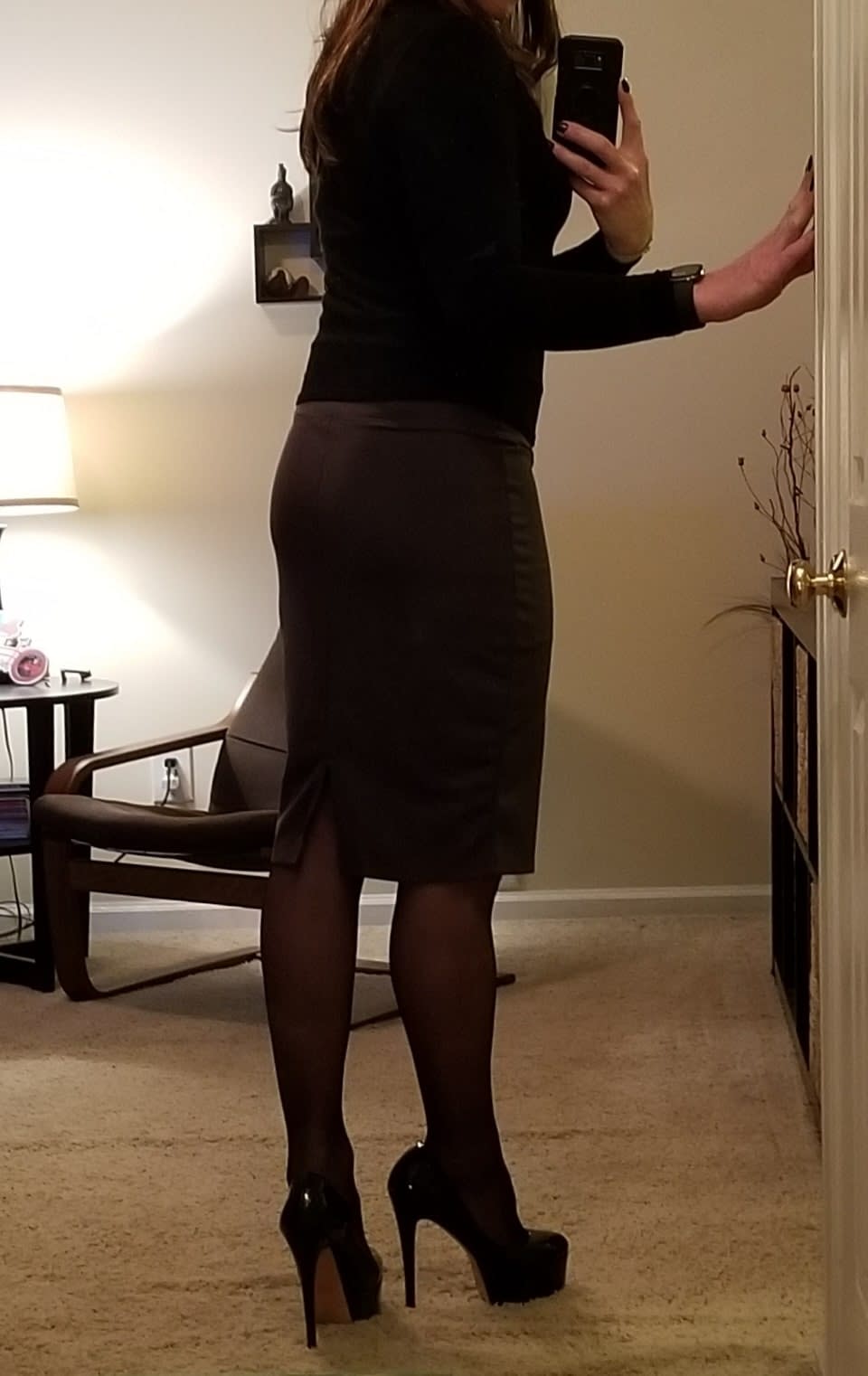 I grew up in a nice family environment with an older brother.  My personality is similar to my mother’s.  My mom is a calm, understanding, and loving type, and my dad is loving as well, but in a different way.  He is also a strong and hard man.  He is strong in his morals and beliefs and was hard on my brother and me when he felt he needed to be.

I remember as a young boy being drawn to girl’s clothing.  One of my first memories is at my grandmother’s house wearing my aunt’s black leather boots around.  At that age, I’m sure it’s normal for any boy to do that, but it felt different for me.  I was drawn to them.  I remember spending a lot of time in the bathroom trying on my mom’s clothes.  They obviously didn’t fit, but it felt good to wear them.  I was never drawn to boy’s clothing like I was to girl’s clothing.  I remember thinking how nice they looked and how nice girls looked in them.  I would often wonder why boy’s clothes weren’t like that.

My mom often wore pants to work with knee-high stockings.  When she got home, she would take them off and lay them beside the couch.  When I was in elementary school, I would sit on the couch and watch cartoons in the morning before school.  If my mom’s stockings were still there, I would put them on under a blanket.  I remember one morning my dad coming and telling me to get ready for school, and when I took the blanket off, he saw the stockings on my feet.  He rushed over to me and started yelling.  “WHY ARE THOSE ON YOUR FEET? TAKE THOSE OFF; THOSE ARE FOR GIRLS, YOU’RE NOT A GIRL, YOU’RE A BOY, BOYS DON’T WEAR THOSE.”  I remember crying and later being really scared and confused.

The feelings didn’t go away.  I was still drawn to girl’s clothing, and I wanted to wear them, but I couldn’t.  I was a boy, and boys don’t wear those.  I couldn’t help myself, though.  What was wrong with me?  Why was I like this?  Was I supposed to be a girl?

I knew I couldn’t let my dad catch me again, so I was careful about how and when I would do it.  He was a career firefighter and worked 24-hour shifts, which provided opportunities.  I also didn’t know how my mom would react, so I needed to be careful so she wouldn’t catch me either.

I wasn’t careful enough because I remember her finding a pair of her pantyhose in my room.  She asked me about them, and I think I told her something along the lines of liking to see women wearing them, so I put them on and looked at myself.  Her approach was slightly different than my dad’s.  She told me not to wear them, brought me a JC Penny catalog, and told me to just look at the women in the catalog.  I look back, and I think it was a cute and funny gesture.

After that, I started finding better ways of hiding things.  It was mostly pantyhose because I felt my mom would definitely miss other items.  Since she already found a pair of pantyhose, I was sure I would be the prime suspect.

Once I started puberty, another feeling arose.  When I would dress and see myself, I would begin to get a sense of arousal.  That just added to the confusion, and I would rip the clothes off in disgust because I’m a boy, and boys don’t wear those.  The feeling of wanting to wear them never went away.  Once my hormones leveled out, the arousal feeling went away, and I felt more like myself when I dressed.  I was starting to date girls, which offered opportunities to buy clothes of my own.  Christmas was the best time because it would seem like I was buying a gift.

I raced BMX bikes as a young teen, and once I was in high school, I started my first job at a bicycle shop.  Working there, I learned of road racing, like the Tour de France.  In road racing, cyclist shave their legs (not for aerodynamics as many think).  I was intrigued by this and decided to start racing road bikes.  The thought of being able to shave my legs excited me.  It made me feel a little bit more like a girl, especially when I would dress.

I remember my parents coming to my first race.  I pulled off my sweatpants to get ready, and there were my silky smooth legs.  I remember my dad asking my mom under his breath, “did he shave his legs?” and my mom replied, “they all shave their legs.”  I could tell he was bothered by it, but he never said anything to me about it.

I continued to race bicycles through most of my adult life, but not solely to shave my legs.  I enjoyed the sport and was passionate about it.  It didn’t hurt the way my legs looked in a skirt and a pair of heels either.

Throughout my young adult years, the conflict of trying to figure out what was wrong with me, why I was like this and was I supposed to be a girl still rumbled inside.  The feelings of wanting to wear women’s clothes never went away.  My dad’s words still rang inside my head, though, along with the vision of the stern look on his face, “YOU’RE A BOY, BOYS DON’T WEAR THOSE.”

After high school, I started my career as a firefighter, and on weekends when I wasn’t working, I started going to clubs with friends.  I loved the music and the people seemed to suit me.  Drugs were a big part of the scene, and unfortunately, I fell victim to that and started using various types of drugs.

In the club scene, I did, however, meet a girl, and we started dating.  We had some gay friends, and because of that, I felt she wouldn’t judge me if I told her about this other side of me.  I mustered up the courage and spilled the beans to someone for the very first time.  She was interested in seeing me dressed, so I made her close her eyes while I put on my hose, a dress, and a pair of heels.  I will never forget when she opened her eyes.  She gave a little head nod with a slightly scrunched face and said, “oh, f*ck yeah!”  That made me feel good, and I was relieved.  I considered myself a freak with a dark secret and she was accepting and supportive.

One bad trait I had was insecurity.  The drugs only amplified this, and if she was ever hanging out with her friends while I was working, I became very jealous and eventually ruined our relationship.  I was a jerk and it was one of many regrets in my life.

Quite a few years later, I would eventually meet the woman I would marry.  She pulled me out of the drug-filled world I was in and cleaned me up.  We had a child together, but unfortunately, our marriage would crumble when, ironically, she became addicted to opioids.

I never told her about the other side of me.  It sounds weird because she was the woman I loved and trusted, but I was never sure how she would react.  I think I was more afraid of losing her than I was of what she would think of me.

She eventually found out by chance after we had separated.  I had carelessly left a pair of shoes inside a bin in our closet.  When she asked, I gave her a summary of my story.  She wasn’t understanding and would later try to use it against me.

After a few more failed relationships, I’ve lost the desire to date.  The conflict still rumbles within and can be overwhelming at times.  I have periods of depression that can last for weeks.  I’m able to hide it and deal with it pretty well, though.  I’ve never had any thoughts of harming myself.

I remember my mom telling me at some point in my life when she was pregnant with me; she had hoped that I would be a girl.  I always had a feeling that I should have been a girl and would often wonder why I wasn’t a girl.  I don’t think the questions of why am I like this and was I supposed to be a girl can be answered.  I know now that there is nothing wrong with me.  I’m a boy, and boys DO wear those!

Thank you so much for reading my article and if you have any response to my article or if you’d like to answer one or more of the following questions.

Thanks again for your time and responses!

Crossdressing is something I have done since I was a little boy. I started around 6 or 7. I don't know if I could completely explain why. I have always had an admiration for women's clothing and how elegant they can look. I used to think that something was wrong with me. When I was very young, my dad caught me with my moms stockings on and came down on me pretty hard. I remember being terrified, crying and confused about it all. I know now that nothing is wrong with me, it's who I am, but even in my late 40's, there is still a battle inside me.

Latest posts by Deni (see all)

Hi Deni ❤️ I can recognize myself in much of what you write. Although my mother never said anything to me, I knew that she knew. Because I’m transgender I haven’t had many relationships but when I was married my future x-wife found a skirt and blouse and tossed it in the bin. And all hell broke loose. It was at least one of the reasons we later divorced. After we were divorced my son, then 20 something, found a picture of me in a ball gown. He told his mother an they both went furious at me. A couple… Read more »