I had been watching a Sister who joined my Local Crossdresser Support Group (LCSG) nearly a year after I had joined. I have admired her courage and being brave and open telling her stories going out on her own with her wife. She is obvious if you interact with her that she is a crossdresser. She has fun with it, expresses herself and educates people one by one.  I personally had been very quiet and discreet trying to pass as a women around every corner and by the way very successfully.  I have gotten to the point of passing at will, however passing is again hiding me, it is going back into hiding like I was when I was just Manly.  After hearing her stories of being up front helped me feel braver to be me!  I am Meili and I cannot change it, as well I cannot change the world but I can help change people one by one.  Meili is OUT!  In this past year, Meili introduced herself to her two daughters, her son, mother, three brothers and their wives.  Meili came out to her ex-wife of 22 years because we felt she had a right to know.

For the past eight years, every Friday evening or Saturday afternoon, Manly went to the same Mexican restaurant.  It is almost exactly like Cheers, if you remember the sitcom, and I am one of the charters.  Over the past several months, I came out to most of my Cheers buddies allowing many of them to meet Meili. I have also told most of the staff who are like family to me.  This leads up to the moment, I recently threw a grenade!

I went to the restaurant the first time as Meili.  It was near closing time when I knew most patrons would be gone, especially those who knew me.  This was not easy.  Some did not recognize me, some did, some were laughing, and others were intrigued.  When I was exposed those that did know who I was, maybe I initially laughed.  Several younger men were questioning my sexual orientation; they came at me at all angles.  When the fragrance of the perfume wears off everything came back to normal.  By this time, many employees were standing around or sitting next to me, asking a lot of questions which I answered freely.  It was lovely.

When Meili walked into the restaurant the second time, it was much earlier in the day.  No one immediately recognized who I was as I sat down.  Many who knew Manly did not catch on until the manager who always takes care of me asked what I would like to drink and eat.  My Cheers friends could see I was somewhat nervous, and told me not worry and just to be me because they had my back.  Quietly, a friend put male patron at ease who was questioning him about me.  Another sitting next to me asked if I had a brother.  I said, yes I do, why.  That patron said I looked almost just like another patron he knew — well little did he know, it was me. 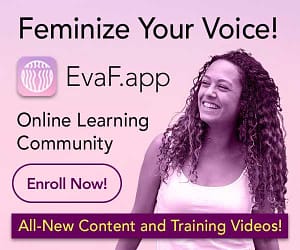 Meili recently visited the restaurant with my two beautiful daughters.  Again someone with whom I talk to often knew there was something peculiar, but could not connect the dots.  He was told later after I left that I was Manly, who is now Meili.  I now go there as Meili more and more often.  The staff has even mentioned that they like me visiting as Meili more so than when I did so as Manly.

Being able to be you comes down to you,the relationships you have with family, people in your community, and the support you gain from those relationships.  Today I enjoy all of that and so much more.  I have my family and their love. I have my lady friends who help with dressing and makeup and go shopping with me.  And I have the support of the strongest of men who definitely have my back.  When Meili introduced herself to everyone at Cheers in her own way, they all managed to accept Meili in their own way.  I am sure this is not the end, but rather a process which will just keep moving forward.

In the end, it came down to me being brave enough to accept me for being me.  I decided not to live in fear.  I have amazing experiences just being me which help others in accepting who we are, and in understanding more about the community of which I am a part.  I am Meili, I am free, and I am OUT!

Very exciting, I just came out to my wife of 30yrs the other night and that was encouraging. Thank you

Just starting to crossdress.But I live in a small town where everybody knows everybody.I simply want to sit outside dressed.How do i do this so no one knows who I am

Thats me too Nadia. I sit outback where i am not visible to anyone. Sometimes when it’s dark, i venture out my front door. Bronwyn

I love this so much. Hopefully one day I’ll be able to do the same.

My heart sings for you, dear. Veronica

Fabulous article you. Though everyone I knew suspected and was even quite confident that I cross dressed and was gay I still made attempts to stay in that cold dark closet. And though it was very clear and obvious that I was because of how I dressed and my persona didn’t come right out and verbally shout it out. But when I did choose to tell on myself everybody told me they knew a long time before but waited to hear me say it out loud. Oh what relief it was and still is. I am quite proud of who… Read more »

And you have showed me how to be proud of me!

That is such a sweet thing to tell me Julie thank you, your a doll. And don’t let anyone try to tell you otherwise. Luv ya!

Glad you were able to come
Out to your ex ,daughters.brothers,&sisters,
Along with your friends at the
Resteraunt. I AM.out to my
Wife and one lady that used
To work in a medical facility
.

Soon my two sons will be moving on and i look forward to dressing at home. But, i have already started. I began buying female items of the rack. They can pass for either male or female. I often go out completely

The one, and only time I came out, was when I was 15. However, all my life, people have mistaken me for a girl, at first. When I was in Asia, it happened more often, but it was mostly with the working girls. Many thought I was gay. When I got back to the states, I joined a club, that was into scene play. With what I had to go through in the Vietnam war, I was accepted as a master, but mostly took the role of Dungeon Master. It took several months, before many of the gay men, who… Read more »

I can only say after reading some of the stories here that I’m thinking of stepping out and going for a walk all dressed as the woman I feel that I am! I still have not come out to my family! I do have two close friends who are women and they accept me and When I showed one a nice dress she said she could see me in it! Since then Cindy has given me a pair of jeans and a crop top with spaghetti straps! I had to try it on and I love how I look and… Read more »