A Little Dab’ll Do Ya 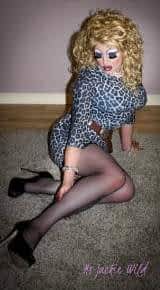 I was surfing the web one day for similarities relating to my own lifestyle and commonalities to my past, present and perhaps future when I came upon a site called “Cross Dresser Heaven.” As curiosity would have it I clicked onto it and began reading a couple of stories. I was amazed and kept reading. Here at CDH were so many others describing their lives, their lifestyles, their fears, their happiness of being a cross dresser and I said to myself “wow this is cool stuff”. I have joined other sites regarding cross dressing, drag, transgender and the likes but there was something about this site that reached out and grabbed me. I looked through the photos and there before my eyes were so many others that share the exact same commonalities as I. Immediately I thought to myself that I needed to be a part of this community so I began filling in the blanks. But then I stopped because I suddenly had another thought, what if I’m not accepted because my experience or lifestyle goes a little deeper than what I had read so far.


I thought it would devastating to be turned down and we all know of rejection and the effects it can have on us so, being a little paranoid and apprehensive, I discontinued filling out the form. Then yet another thought came to mind and that was that if cross dressing only was a way to be a member and a part of the site then I would just claim to be a cross dresser and nothing else. As I mentioned earlier, my lifestyle and experience goes deeper because I’m also a raging drag queen and I’m gay. From what I had thus far I wasn’t seeing anything regarding drag queens or being gay. No instead I was seeing cross dressers that were married to the opposite sex so how could I possibly fit in when I’m also a drag queen and gay? Yep my mind was then set on just lying and play the part of a CD so I could join and become a part of. Well to begin with that thought was not going over to well because I had already played the part of lying and trying to keep who I am a secret and it didn’t really work out in the past and I was miserable. Did I really need to be dishonest again just to fit in and join a site or community? “No” was my answer, for I have come too far.

My past is full of lies and deceit and I never want to do that or be that again. Besides, what’s the worst that could happen; to be turned down by whoever made the decisions? It was then that reminded me of when I first began cross dressing (I don’t really like that title or phrase but it is what it is). I wouldn’t lie I would accept whatever rejection came, I’m a big girl, right, and I have made it through just fine being honest, so why go against everything I have accomplished now just to be a part of something that I didn’t even know was real. Hell for all I knew it was just another site someone created online to make money from. A lot of online sites we find today are just that. After we create a profile and fill in our information we’re then asked to pay for membership. Plus I had seen that part of CDH, so I wasn’t really ready to spend the time doing that in addition to lying just to be part of something.

However, all I had to lose was being told no and that would be that, but after I finished creating a profile and was in I immediately began to feel a part of it. There were all the stories I related to, the photos of others looking content, happy and proud to be wearing what they wanted to wear. I decided I would at least give it a try so I posted a few pics of me just cross dressed and in full drag attire. It was soon that I began getting compliment, friend requests and talking in chat which, by the way, I didn’t know the rules of. I’m one of those people that says what’s on my mind and figure if anyone don’t want to hear what I’m saying they should not listen and that’s that. I have never been one to abide by many rules. All my life I broke rules instead; at school, at home, in traffic, wherever I was. It’s now worth saying that because of some very adverse consequences I now do try to follow rules. Anyway to wrap this up I just wanted to say that I’m grateful I was and am accepted in this community. It’s an awesome place to be a part of. I’ve met a lot of people here that I truly adore. I have been welcomed in so many ways as well as made so many friends. I feel the need, anytime or anywhere I feel welcome and get so much out of something, to give back or contribute to the cause. In my case I created two different clubs: Transista’s and Transsista’s Love & Romance to give back. I contribute in every way I can with hopes that someone will get something out of what I write or say from my life story. Cross Dresser Heaven has become so important to me that it’s became my second home so to speak. Signing in has become part of my morning regime. I love it here and I’m here to stay. All that’s left to say is that I’ve come to know that “A Little Dab’ll Do Ya” to begin your day!

Great sentiments glad that you shared with us.

Oh my god exactly what i was thinking,but its actually turned out to be a heaven. everyones so nice. The social media of societies misunderstood

Jackie , this is so nice. I felt alone before I “came here”. Who, at 53 decided they were transgender? Turns out, a lot of people! I even have a CDH app. so when I don’t feel like following the rules at work I sign in 🙂

I am so glad to have you here and expanding our horizons here at Crossdresser Heaven. I will always have you back and I can’t wait to see what you REALLY can bring to the table now that you have gotten settled in and know your voice is being listened too!!!! Keep it real Jackie Wild!

Thank you so much Codille for all you do, all your understanding and patience for this little drag queen/cross dresser person. I just adore you and for good reason. It’s almost countdown time to learn about some things I want to bring to the table here at CDH. I feel compelled to say that I want only the righteous and goodness for the namesake of CDH. I am going to try my best to be even more of a fixture to this place I found and call my second, oh wait third, home or oh gawd something like that. I… Read more »

I am truly grateful to CDH and all of you here at CDH that make it what it is. As most know I recently went through some physically challenging as well as some mental and spiritual nightmares and emotionally draining things. In all honestly I am still dealing with allot of the situations. But I’m making it through it because of so many of you being here and spending time with me just to be a friend. And if I missed thanking anyone for comments on this post I truly apologize because each one was so real and sweet so,… Read more »

Hang in there Wild Child..we are all in your corner!

Thank you Jesse, means so much to me having friends here like you and so many others. I’m hanging in there and feeling quite a bit better now. I guess it’s just one more of those things they say “what don’t kill us makes us stronger” kind of examples huh. Thanks again, Wild Child.

Can’t wait to read it.

You’re not the only one, I’m a cross dresser and gay too.

Good for you Angelika, may your journey be strong and devoted.

Thank you! And you as well.

Thankyou Jackie, I am JackieOhNo Great story,we never know who might become inspirational in our lives I’ve been in a twelve step program for drinking,37yrs successfully, You probably know which one even tho it is anonymous,haha. Thank God. This site works very similarly ,people sharing their successes so others can benefit Right now I am getting ready to move to Florida(DaytonaBeach) I look forward to sharing and listening,I’ll do more in three weeks or so when I get settled. I’m 68 yrs and been Xdressing only 6yrs,that’s a lot of years Repressing feelings I’m so happy ,also curious about feeling… Read more »

Lovely and touching story, Jackie.
Thank you for your honesty. It’s sad to think that we might be rejected because we get tagged with a certain label. We just have to keep our chin and be the person we want to be if it’s for a lifetime or a few hours a week. Just me, no guilt, just me.
Another Jackie

Hi Jackie . . . . . this site has quickly become my favorite place to be–with others of like persuasion, be they straight, gay, transgender, or bisexual [like mself]. We have a common interest, and are not afraid or ashamed to be who we are; stories submitted by others are so welcomed, and looked forward to–that we finally allow ourselves to voice our own thoughts, opinons, and experiences. This ‘Crossdresser Heaven’ is like a breath of fresh air, and I’m sincerely thankful for its creation; I started out, yesterday, with a ‘basic membership,’ but am already so enamored by… Read more »